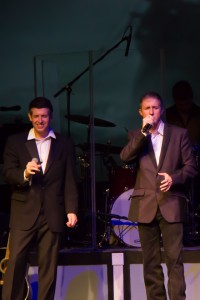 Matt, left, and Mark Rankin during their inspirational performance of “The Anchor Holds.”

I spent the evening of Oct. 30 “blasting through the past” at the Rankin Brothers show and, excuse the pun, had a “blast” and from the opening note of the Bob Seger hit, “Old Time Rock N Roll” to the last note of Chuck Berry’s 1958 classic, “Johnny B. Goode,” what a blast it was! Over 40 numbers from the 50’s through the 90’s, each impeccably performed and rekindling memories of some of the greatest moments in music history, presented in that special personable Rankin Brothers style.

The stars of the show are the brothers Mark and Matt Rankin, who have been performing the music they love together since they were kids. You sense their love of the music, respect for the artists who performed it and their affection for each other and their family which combines to make a special entertainment experience even more so. Joining Matt and Mark on the stage is Lori Kelley – vocalist; Paul Stephans – base, harmonica & vocals; Cody Titus – music director, keys & vocals; Josh Breedlove – drums; Jim Murphy – sax, keys & vocals and Mitch Kiersey – lead guitar, mandolin & vocals.

Time really flies by as they perform hit after hit in a manner that resonates with those who actually grew up listening to them as well as a new generation who might be hearing them for the first time. The talent of the vocalists and instrumentalists in the show, coupled with the variety of ways each different number is presented results in a wonderful entertainment experience. 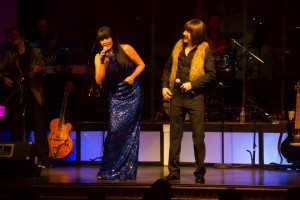 “Sonnie and Cher,” Mark and Lori, performing “I Got You Babe.”

One example is the classic Sonny and Cher hit, “I Got You Babe,” performed by Mark and Lori. The musical performance and costuming was spot on, but their interaction and Sonny’s hairpiece added a special dimension to the performance that had the audience in stiches. Another, entirely different example, was the John Denver classic “Annie’s Song” which was simply and eloquently sung by Mark with Mitch Kiersey featured on the mandolin; what a special moment.

It should be pointed out that although they are performing classic hits in the style, and in some cases, similar costuming to that worn by the performers who made the songs being sung famous, this is not a “recreation” show like the Legends in Concert. It is more a “Review” of the classic hits being performed and of the artists who performed them, done in that unique Rankin style. That said, I must confess that there were a number of times during the show where I could swear I was hearing and seeing the same performers who originally made the song(s) being sung famous. Matt’s Buddy Holly set of “That’ll Be The Day, Rave On and “Not Fade Away” was one of those times.

Lori Kelley, the shows female vocalist, displayed her considerable vocal talent throughout the show doing a great job on numbers such as the Petula Clark classic “Downtown,” the Connie Francis hit “Stupid Cupid,” and others as well singing backup vocals. I just loved her performance with Mark as Cher and her performance of the Anne Murray hit “Could I Have This Dance” which was simply beautiful and touched my heart. 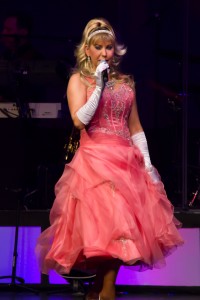 In every Rankin Brothers show I have seen performed, and there have been a number of them over the years, they perform the song “The Anchor Holds,” which was originally written by Lawrence Chewning and, with his permission, reworked and recorded by Ray Boltz. It is a one of kind performance of a one of a kind song that was as inspirational as it was beautifully sung.

The performance that I saw was the last of their regular season show as they, like most Branson shows, started performing their Christmas show on Nov. 1. The good news is that the format of their Christmas show is to perform some of the audience’s favorite numbers from their regular season show in the first half and Christmas music in the second half. The Christmas portion will contain “Blue Christmas,” “Mary did you Know,” “I’ll Be Home for Christmas,” “White Christmas” and many more. What a dynamite show that should be.

I can think of no better way to end this review than to reiterate that “one does not just ‘see’ the Rankin Brothers Show they experience it and what a wonderful experience it is. It will bring back memories to those who actually heard the music in real time and create new memories for a generation that was not even born when this timeless music was first performed.”

For additional information on the Rankin Brothers show or for information or tickets for any of Branson’s shows and attractions or for lodging arrangements please contact the Branson Tourism Center, one of Branson’s largest and most respected vacation planning services by calling 1-800-785-1550 or through its website, www.BransonTourismCenter.com.