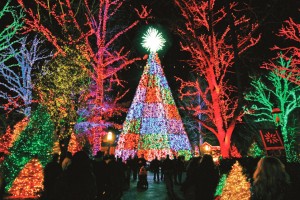 “Since its debut  over twenty years ago, Silver Dollar City’s Old Time Christmas, with its millions of lights, shows, rides, shopping and other activities has become the major focal point of Branson’s ‘Ozark Mountain Christmas,”‘ said Tammy Johnson, the General Manager for the Branson Tourism Center, one of Branson’s largest and most respected vacation planning services. “With the whole ‘city’ festooned with millions of Christmas lights, it truly is a magnificent spectacle and one that has just been named as one of ‘USA Today’s Top 10 Spots for Holiday Lights,” she continued.

Brad Thomas, Silver Dollar City’s General Manager said, “We are excited to be named among the rock stars of holiday lighting on the editorial side of USA Weekend, with a circulation of 18 million.” “It’s so important to note our employees are essential to making us who we are, as it’s their ongoing and undying passion for excellence that leads to accolades such as these,” he added.

He also points out that a portion of “Old Time Christmas,” its “Christmas on Main Street” sound and light show, complete with its five story special effects Christmas Tree and its hundreds of thousands of lights synchronized to music, is one of the 20 nominees for the nationwide “10 Best Readers’ Choice Travel Award Poll.” Anyone can vote, once a day between now and 11:59 AM EST on Monday, December 15 at www.10best.com/awards/travel/best-public-lights-display. The results will be announced on line at 10best.com on Dec. 17 and published later in “USA Today.”

Branson Tourism Center’s Johnson asked, “How cool would it be if Branson and Silver Dollar City fans voted and made “Christmas on Main Street” number one in the poll?” She also reminds visitors that “Silver Dollar City’s Old Time Christmas” is just one of the many things that make “Ozark Mountain Christmas” and Christmas time in Branson so special.