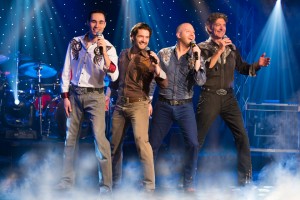 Branson “Buzz of the Month:”

Grand Country’s Grand Jubilee, staring the “New South” quartet, will be the first of Branson’s almost 100 shows to premier their 2015 season show. Mike Patrick, General Manager and Producer of Grand Country Shows, said, “We start rehearsing for next year’s show while we are doing our Christmas Show and actually premier it during our New Year’s Eve show and party. We are really excited about the new show with new music, fresh comedy and some really ‘grand’ surprises.”

“Buzzin in Branson” is produced monthly by the Branson Tourism Center as a service to its customers and others interested in what’s going on in Branson. It is in a concise and easy to read format that conveniently provides pertinent and timely comments, information and a list of the major special events, shows and activities for the month being “Buzzed” which, in this case is January 2015.

Buzzin in Branson during January 2015

Dec. 31: OK, so strictly speaking it’s not happening in January, but New Year’s Eve in Branson will sure be an exciting end to 2014 and beginning of 2015.
Jan. 1 – 31: The vast majority of Branson’s Attractions such as the Titanic Museum Attraction, Ripley’s Believe it or Not Museum, the National Tiger Sanctuary, Promised Land Zoo, and many others are open year round. Branson’s retail shopping, including its major outlet malls and Branson Landing, are open year round.
Jan. 1 – 31: The majority of Branson’s shows are closed for their winter break and to prepare for the 2015 season during January and those that are open are operating on “winter” schedules. The following list includes some of the major shows that will be open, a general scheduling note and a link to additional information, specific schedules and ticketing information:

Please feel free to contact the Branson Tourism Center, one of Branson’s largest and most respected vacation planning services, for additional information, tickets or hotel reservations by calling 1-800-785-1550 or through its website www.BransonTourismCenter.com.