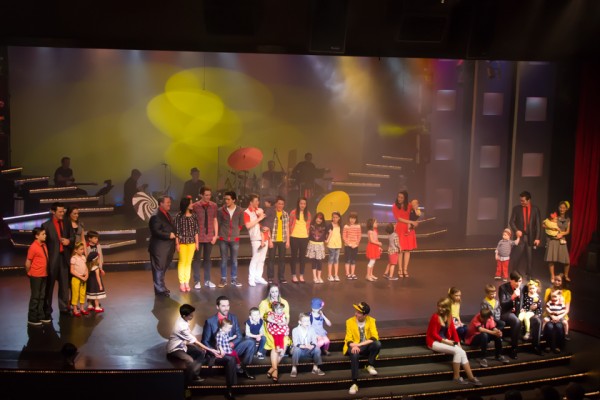 The Hughes Family during their touching performance of “Happy Together.”

On the evening of January 17 I had the opportunity to see “it,” feel “it” and hear “it.” I absolutely loved it starring the Hughes Brothers and their families. When you weave the talents of the Hughes Brothers, their wives, children and a great five piece live band into a magnificently choreographed, colorful, high energy and fast paced production, the result is a magical inspiring cornucopia of great singing, instrumentals, comedy, dancing and entertainment, covering everything from pop, classical, country, gospel, patriotic and more that is truly one of Branson’s ultimate entertainment experiences.

The evening started with dinner in the theatre’s balcony dining area which was a delightful three course meal prepared on the premises by Chef Laurie and served by Philip. The meal started with a dinner salad composed of fresh crisp mixed greens, onions, tomatoes and croutons and with Ranch Dressing. The entrée consisted of a marinated honey glazed barbecue chicken breast and roasted pork topped with a honey Dijon sauce accompanied by oven roasted potatoes, fresh green beans and a dinner roll. The portions were more than adequate and it was topped off with a dessert of White Chocolate Champagne Cake lightly drizzled with raspberry sauce that was out of this world and just melted in your mouth. It was easily one of the best “show” meals I have ever eaten, both in terms of the quality of the food and the service. It should be pointed out that the show may be purchased separately from the meal.

The Hughes Family is billed as the largest family performing together on stage. The Hughes Brothers, Marty, Jason, Adam, Ryan and Andy are the stars of the show which also prominently features their very talented wives Cindy, Vikki, Carina, Mara and Becky along with about 32 of their children and a live five piece band consisting of Band Director Ray Harris who also plays keyboards and trumpet; Randy Luna, keyboards and arranger; Steve Habour, guitar; Marty Wilhite, Bass and R.J. Jacob, Drums.

That said, one thing should be made perfectly clear, every element of this show is a polished entertainment gem. It’s not just a matter of putting kids in a show. These kids are good! Some of my favorite performances were the boy’s high energy performance of “Seize The Day” from Disney’s “Newsies,” “It’s a Hard Knock Life,” from “Annie” and the children singing “I Am A Child of God” during the gospel segment.

Another of my favorite performances by the “kids” was the violin/fiddling performance by Kristina, the oldest performing Hughes child at 22, who is also a violin instructor, along with William, Hannah and Jacob Hughes. The set starts off with Kristina eloquently playing a violin solo of “Simple Gifts,” a Shakersong written and composed by Elder Joseph Brackett in 1848 after which she was joined by the others as they performed a medley consisting of Aron Copeland’s “Hoedown,” “The Devil Went Down to Georgia,” “Turkey In The Straw,” “Barber of Seville,” “The Sabre Dance,” and “Pirates of the Caribbean.” It sure was a wow moment for me!

There’s a reason this is worth stressing. I think it can be safely said that all Branson shows, in terms of content, are “kid friendly,” but very few are “kid enjoyable” throughout the majority of the show. Still fewer simultaneously entertain kids and adults at the same time and level throughout the majority of the show. Simply put, this is one of the few that does and they do it ever so well.

When the Hughes Brothers sing together, their familial harmonies are just a joy to hear. Two of my favorite numbers, from among the many they sang were “Pure Imagination” and their acapella version of “America.” If all they did was sing that would be enough, but in addition, they kind of “MC” the show as they maintain a constant relaxed interaction with the audience through their comedy and sharing of information about themselves and the family as the show moves from one entertaining element to another. 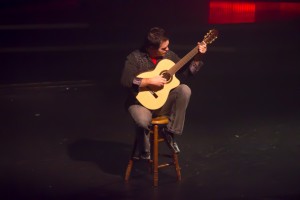 That “element” may be another of my favorite sets in this show, the acoustic guitar performance by Adam Hughes as he performs a medley including “Recuerdos de Alhambra,” “Leyenda” and “Malaguena;” their wives performing the “Sunshine medley;” the brothers performing “How Deep Is Our Love” with their wives or the absolutely beautiful and touching performance of the whole family performing “So Happy Together.” The production and presentation of the shows gospel segment is one of the most unique, beautiful and inspiring I have ever experienced.

The thing is, whether it’s the Hughes Brothers singing or entertaining, their wives or the kids doing one of their sets the show is a constantly evolving carousel of some of the best entertainment on any Branson stage. The quality of the choreography dancing, singing, costuming, overall production and flow of the show makes it one of the most entertaining shows I have ever seen in Branson and, in the last 28 years, I have seen a lot of them.

“It’s,” a wonderful show that should be shared by families together as they are simultaneously entertained and inspired as the Hughes family shares their family and talents with yours creating a special family memory that will not soon be forgotten. I just have to believe that if you and your family see “it,” feel “it” and hear “it” that you will absolutely love “it” as much as I did.