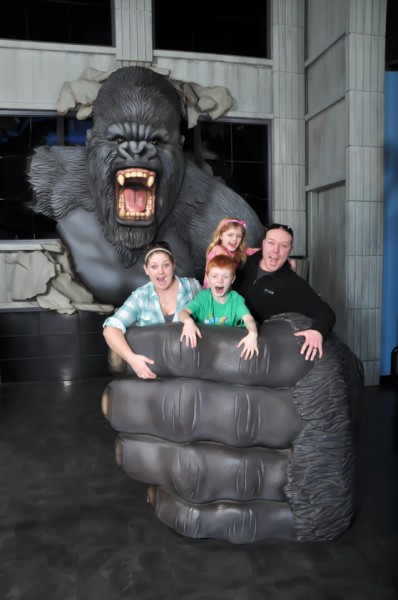 “The term ‘waxing’ can mean a lot of things, but when it comes to Hollywood ‘waxing’ Branson it can mean only one thing,” said Annette Wood, the Director of Sales and Marketing for the Branson Tourism Center. “The opportunity to see some of your favorite Hollywood stars such as Harrison Ford, Tom Hanks, Jack Nicholson and dozens of others, as you ‘share the spotlight’ with them posed in the ‘sets’ that made them famous, at Branson’s Hollywood Wax Museum.”

You know you are in for something exciting when you walk by “Jack Nicholson” standing in front of a huge fierce looking face of “King Kong.” Of course when you look a little closer you will realize that he has his hand out and cupped for you and your family to step in and have a what used to be called “a Kodak moment.” The result will certainly be one of the most unique pictures your family has ever taken.

From there its one wonderful realistic wax creation after another on your self-guided tour through the museum. Whether it’s a monster or a star, each is featured in a realistic set relating to what made them famous. As you start your Hollywood Wax museum adventure one of the first stars you will meet is Tom Hanks as “Forest Gump” sitting on a bench with, you guessed it, a box of chocolates. Each of the sets has an “information plate” containing information about the figure, fun facts, awards they have won, “pet peeves” or some other little known “factoid.” Many of the exhibits have sound to enhance the experience such as the “Rocky Theme” near the Sylvester Stallone “Rocky” exhibit. 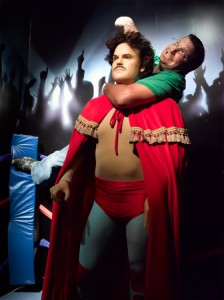 One really interesting feature of most of the exhibits is the ability to share the spotlight with the stars by posing with them. As illustrated in this photo, provided by the Hollywood Wax Museum, of Jack Black in a “pose” from his comedy “Nocho Libre,” the results can be quite interesting and entertaining.

Some of the “stars” you will meet on your tour include among others are Judy Garland, Clint Eastwood, John Wayne, Harrison Ford, Clark Gable, Samuel L. Jackson, Michael Jackson, Nicholas Cage, Barbara Eden, Eddie Murphy, Marlon Brando, “The Terminator” and many more. Two of my favorites were the “Star Trek” set with William Shatner, Lenard Nimoy and DeForest Kelley waiting for Scotty to beam them up and the diner scene with Marilyn Monroe, Humphrey Bogart, James Dean and Elvis Presley serving up ice cream.

As you go to the second floor you will be given the opportunity to take a short “Hollywood Trivia Quiz,” shoot in a shooting gallery, or try a variety of coin operated amusement machines. Then you enter the monster area with Frankenstein, Dracula, Phantom of the Opera, Elvira, Hannibal Lecter and others. There is a “Monster Bypass” for those who do not want to see the monsters.

After experiencing meeting a number of your favorite Hollywood stars your tour comes to an end in the museums fully stocked gift shop containing Hollywood gift items. For additional information on the Hollywood Wax Museum please call the Branson Tourism Center by calling 1-800-785-1550 or through its website, www.BransonTourismCenter.com