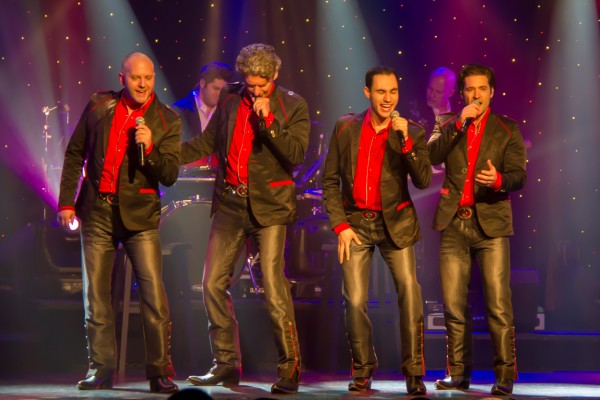 Luke Menard, far right with the rest of “New South,” David Ragan to his right, Mark McCauley and Drockelman.

Branson visitors are blessed to be able to see many national stars, including Billy Dean, The Osmonds, Collin Raye, Larry Gatlin and the Gatlin Brothers, Jimmy Fortune and many others whom they have probably seen on TV throughout their award winning careers. However, it would be impossible to offer the tremendous live entertainment Branson offers on a regular basis without the wealth of talent possessed by the many Branson performers who, although not blessed with national careers, are in many cases no less talented.

Just how talented is often reflected in how well they do, or have done, when they perform against literally thousands on national TV shows such as the prime time hits America’s Got Talent, American Idol and others. Let’s take a look at some who progressed beyond the preliminary rounds and where you may see them currently performing in Branson:

Jason Pritchard: Appeared on Season 2 of America’s Got Talent and made it to the Final 8.He is currently the band leader/guitarist for the “Steel Horses Band” and a featured vocalist in one of Branson’s most popular shows Billy Dean in Concert With Jarrett. In addition, he has “just released his first single, ‘Good Show’, off his upcoming EP ‘Independence Cowboy’ which was co-written by Billy Dean and is already climbing the charts!”

Luke Menard: Appeared on Season 7 of American Idol and was a Semi-Finalist. He is currently performing with one of Branson’s premier quartets “New South” in another of Branson’s most popular shows Grand Jubilee.

Jason Yeager: Also appeared on Season 7 of American Idol and was a Semi-Finalist. He is currently appearing on the Showboat Branson Belle, and is the vocalist for its “Celebrate Gold” show.

Texas Tenors: Were in the top four during Season 4 of America’s Got Talent. Although they have an extensive touring schedule, they perform throughout the year in Branson and their show, The Texas Tenors, is another of Branson’s most popular shows.

The Duttons: Appeared during Season 2 of America’s Got Talent, the season Terry Fator won, finishing in the top 10. The Duttons own their own theatre in Branson where they perform their extremely popular Duttons show during the regular Branson season.

Ok, we just have to add a seventh who most of you probably never saw on national TV because she was the first and did it before the current series of shows got started. That would be Ambrus Presley who, at the time was 13 and performed under her maiden name, Ambrus Smith, and won Ed McMahon’s “Next Biggest Star.” She had been performing, very successfully, in a variety of Branson shows since she was eight. Subsequently, Ambrus  started performing for Presleys’ Country Jubilee as a lead vocalist, where she is still performing today, married John Presley and is the proud mother of two boys Henry and Hank .