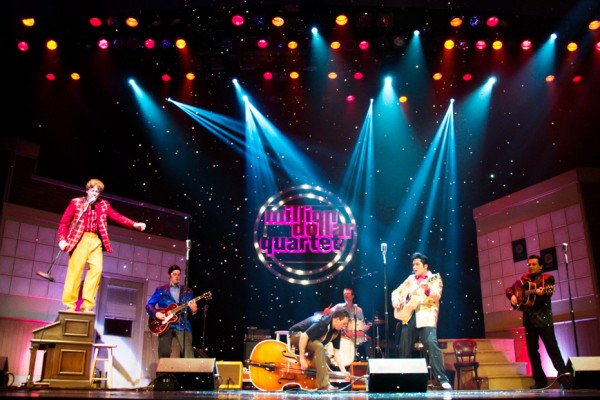 One of the greatest jam sessions in rock n’ roll history was an impromptu gathering of four young recording legends-to-be, Carl Perkins, Elvis Presley, Johnny Cash, and Jerry Lee Lewis, that took place on December 4, 1956 in the Memphis storefront recording studio of Sun Records. What’s really remarkable is that, except for one newspaper article, which dubbed the four “The Million Dollar Quartet,” and its accompanying photo, the jam session went largely unnoticed until recordings of the event were discovered and released decades later. That jam session, those recordings, and the four rock n’ roll legends involved became the inspiration for the Tony Award winning musical Million Dollar Quartet that shares the music, spontaneity, and drama of what happened that day, as these four legends performed together for their first and last time.

Over the last three decades, I have seen many Branson shows of all types, but never one like the Million Dollar Quartet! An outstanding cast, timeless music that everyone knows, and a great storyline combine with the show’s unique set and great production to create an incredible entertainment experience for the whole family that should not be missed.

Obviously, with the recording icons being portrayed and the music being sung it takes some special entertainers to pull it off, and the cast of Million Dollar Quartet does just that…and then some. Tyler K. Hunter as Elvis Presley, Cliff Wright as Johnny Cash, David Brooks as Jerry Lee Lewis, and Brad Waters as Carl Perkins do an exceptional job with hits such as “Matchbox,” “That’s All right,” “I Walk the Line,” “Riders in the Sky,” “Hound Dog,” “Peace in the Valley,” “Whole Lotta Shakin’ Goin’ On,” “Blue Suede Shoes,” “Who Do You Love,” and many more. From among many, two of my personal favorite musical highlights were “Ghost Riders in the Sky,” sung by Johnny Cash, and “Peace in the Valley,” not only because of the way it was sung, but how the storyline beautifully brought each of those in the jam session personally into its performance. 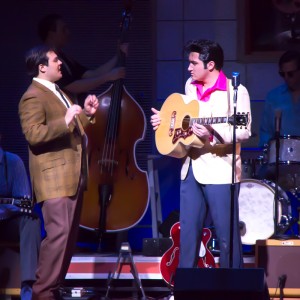 Derek Garza as Sam Phillips having a heart to heart with Elvis Presley.

As timeless and wonderful as the music is, it is the storyline, the historical moment it describes and the way it is artfully woven into the musical tapestry surrounding it that makes this such an entertaining show. Derek Garza as Sam Phillips, the founder of Sun Records, the man some call the “Father of rock n’ roll,” and the person who actually set the circumstances in motion that resulted in the jam session, does a superb job of dramatically narrating the story and tying its diverse elements together in a manner that kept me keenly invested throughout the entire performance.

It’s a story filled with interesting antidotes and historical facts about not only what happened that day, but the artists involved, how the record industry worked at that time, and the early history of rock n’ roll. Among them was why and how Sam Phillips arranged for the four musical icons to be together that day for the impromptu jam session; the angst Carl Perkins, the old man of the group at 24, felt towards Elvis Presley over Blue Suede Shoes; why Johnny Cash was leaving Sun Records for Columbia Records; the answer to the question in everyone’s mind of why Phillips sold Elvis Presley’s contract to RCA for $40,000 in 1955; the jealousy some felt about the emphasis Phillips placed on Elvis Presley, and more. Watching the relationship between Jerry Lee Lewis, the brash outspoken rookie of the group, and the others evolve is a hoot.

Dana Parker as Dyanna, does a great in her role of not only being the girl Elvis brought to the jam session, but in interacting with the four musical icons and Sam Phillips throughout. She also sings and I enjoyed her performance of “Fever”. Daniel Dossey plays W.S. “Fluke” Holland, the drummer during the jam session, and Austin Wilson rounds out the cast as Jay Perkins, the bass player and brother of Carl Perkins. 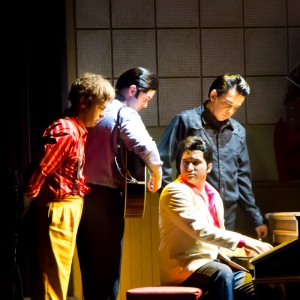 Replication of “The Picture” taken near the end of the 1956 Jam session with the cast of the Million Dollar Quartet portraying Jerry Lee Lewis, left, Carl Perkins, Johnny Cash, and Elvis Presley.

How a simple recording session of Carl Perkins in the studio, with his brother and a drummer, evolved into the rock n’ roll jam session of all time as presented in the Million Dollar Quartet is a wonderfully entertaining experience in terms of both story and music. It’s nonstop fun, drama, and entertainment from beginning to end with no intermission. Oh, and a word to the wise, remember the admonition of Yogi Berra who said, “It ain’t over till it’s over” because, as Dathan Atchison, the show’s producer said, “The “party’s just starting at ‘The Picture.'” Don’t want to spoil the surprise, but “Wait for it” because it’s a grand ending to an absolutely delightful and completely entertaining show that ends all too quickly.

For additional information or tickets for Million Dollar Quartet please contact the Branson Tourism Center, one of Branson’s largest and most respected vacation planning services, by calling 1-800-785-1550, or by visiting www.BransonTourismCenter.com.