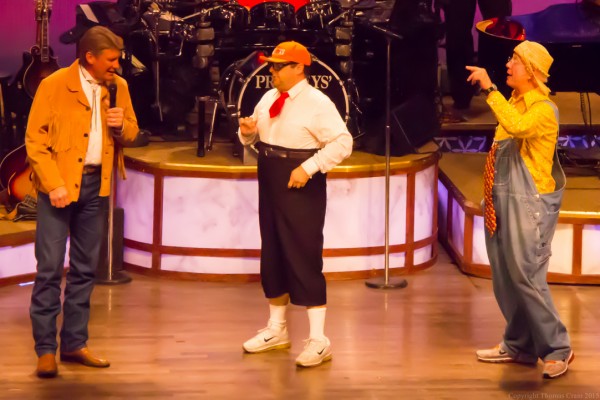 Branson’s nearly 100 shows offer a variety of live entertainment that would be the envy of any major tourist destination. That variety includes spectacular productions such as Jonah or Million Dollar Quartet; music shows covering every genre of music including rock n’ roll, country, gospel, and just about everything else in-between, including magic shows, comedy, and much more.

Although known primarily for its music shows, a major element of Branson entertainment industry, from its very first show, the Baldknobbers Jamboree, has been comedy. The paradigm of music, with comedy routines strategically worked in throughout the show, is a Branson staple that has been entertaining Branson visitors for over 55 years. It is used by some of Branson’s most popular shows including Billy Dean With Jarrett, Clay Cooper’s Country Express, Comedy Jamboree, Grand Jubilee, Paul Harris and the Cleverlys, Presleys’ Country Jubilee, and others. With all the great comedians performing in these and other Branson shows, coupled with the variety of the comedy they offer, it would be virtually impossible to pick a winning trifecta of Branson comedy shows. The comedian(s) in every one of them will have you laughing throughout the show!

In terms of a comedy trifecta in a Branson show, who would bet against comedians Gary and Eric Presley, assisted by their straight man, Jay Wickizer? Ever since the Presleys opened Presleys’ Country Jubilee on the Branson strip in 1967, the multi-talented Gary Presley, a.k.a. “Herkimer,” has been bringing laughter to Branson audiences with his uniquely humorous jokes and comedy antics. That tradition has continued to grow exponentially with the addition of his son Eric, a.k.a. “Cecil,” and straight man extraordinaire Jay Wickizer. The show’s comedy offers a one of kind blend of one-liners, action and skits that keeps the audience, kids and adults alike, laughing and wondering what’s coming next.

From Herkimer’s signature hillbilly garb, Ozarks logic, and comedy, to the complex simplicity of Cecil’s interaction with both Herkimer and Jay, this is one funny trio. They add hilarious comedy to one of the best vocal and instrumental shows in Branson, at just the right time. While some might question the use of the word “trifecta” in this instance, to this writer, the uproariously funny and distinctive comedy of Herkimer, Cecil, and Jay in Presleys’ Country Jubilee, is a trifecta of outstanding, hilarious comedy unlike any other in Branson!

For additional information or tickets for Presleys’ Country Jubilee, or any of Branson’s other shows and attractions, or for lodging arrangements, please feel free to contact the Branson Tourism Center, one of Branson’s largest and most respected vacation planning services by calling 1-800-785-1550 or by visiting its website www.BransonTourismCenter.com.