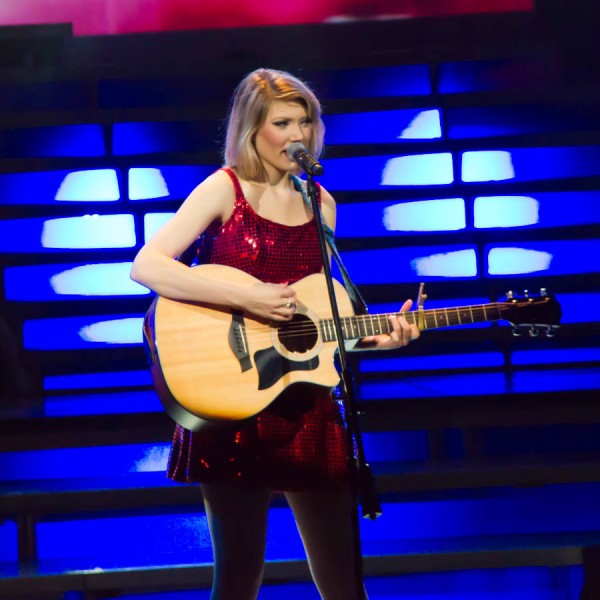 “Branson-Up Close and Personal,” is a service of the Branson Tourism Center (BTC) and is intended to provide readers with an unprecedented look at a Branson celebrity or personality. Except as noted below, this interview with Elizabeth Scarbourough (ES) was conducted, in August, 2015, for BTC by Gary J. Groman, a 30 year resident of the Branson area, local columnist and freelance writer, and is presented in a Question and Answer format:

BTC: You have graduated from college fairly recently. Where and when?
ES: The University of South Carolina on May 11, 2015.

BTC: In what was your degree?
ES: Public Relations from the School of Journalism and Mass Communication, and a Minor in Spanish.

BTC: How do you prefer your act to be categorized? i.e. Impersonator, Tribute Artist etc.
ES: I prefer Tribute Artist, because everything we do is live and we are proud of that.

BTC: Were you singing and dancing before you first became interested in Taylor Swift?
ES: No.

BTC: How old were you when you first became interested in Taylor Swift?
ES: I was 12 and I heard her sing “Tim McGraw” from her first single on the radio.

BTC: What was the first Taylor Swift song you did and how many chords did you play?
ES: “Love Story” and I played four chords.

BTC: How did your first Taylor Swift guitar evolve?
ES: Well, I kind of borrowed it from my church on non-returning grounds. It was an old guitar without strings that had been in a closet for over a year without any use. My brother who was with the Praise Team said, “Take it and learn to play.” I took it, sanded it down, put silver glitter all over it to make it look like her diamond guitar and restrung it.

BTC: When did you first perform publicly?
ES: It was in school at a Halloween Carnival where I appeared as Taylor Swift and played, “You Belong With Me” and “Love Story.”

BTC: What made you decide to turn professional?
ES: I had been doing kids’ birthday parties at home until I went to college, but when I started college I had to build a new audience so I decided to market my Taylor Swift skills by putting up a Facebook page. I put up TaylorSwiftTribute with a few videos that I took myself. I got some bookings working kids’ birthday parties and nursing homes, but it resulted in getting a call from Legends in Concert in Myrtle Beach in early in 2014.

BTC: How long have you been performing Taylor Swift professionally?
ES: If you go from the very beginning to right now it’s been just about a year, but for ten months of that year I was finishing my degree in school.

BTC: Where did you perform your first gig as Taylor Swift?
ES: It was on my spring break of 2014, at BorderFest in Hidalgo, TX.

BTC: What’s the most challenging part of portraying the character of Taylor Swift?
ES:  Balancing the up to the minute details about what Taylor is currently doing or the way she looks with the general look, actions, and perceptions that my general audiences expect.

BTC: Have you ever met Taylor Swift personally or been to her concerts?
ES: I have never met her personally, but I have been to some of her concerts and am going to one in September [2015.]

BTC: Before we go into the more Branson related questions is there anything you would like to add?
ES: It’s like a dream come true for me. I would have been happy just playing birthday parties and nursing homes, but I am so happy that Legends picked me up.

BTC: Is this your first time performing in Branson?
ES: Yes.

BTC: Had you ever been to Branson before?
ES: No.

BTC: When you found out you were coming to Branson, for the first time what did you expect?
ES: I had no idea.

BTC: Had you ever heard of Branson and if so what had you heard?
ES: Yes. That it was a small country version of Las Vegas.

BTC: Now that you’ve been here for a while, what is your first impression of Branson?
ES:  I think that it’s a really neat place with special character, a small town feel, and a lot going on.

BTC: What do you like best about performing in Branson?
ES: The people are so nice and appreciative.

BTC: What’s your favorite thing to do in Branson when you are not performing?
ES: I enjoy hiking the local trails and do that about every day.

BTC: If you could perform or meet with any entertainer/person (living or deceased), outside of Taylor Swift who would it be and why?
ES: The Beatles because they are the definition of a legend.

BTC:  Do you have a favorite hobby or activity and what is it?
ES: Hiking with “Rerun,” my Black Lab.

BTC: Do you have a little known fact about yourself that you think our readers would enjoy?
ES: I am the exact same height as Taylor Swift.

BTC: What is the funniest thing that has happened to you while performing in front of an audience?
ES: I was performing and one of my boots split open so I had to stop and take them off in the middle of the set. I gave them to a little girl in the audience and finished the set in a pair of mismatched polka dot socks.

BTC: What part of your current act do you enjoy performing the most and why?
ES: The song “Blank Space” because its high energy and dramatic interaction with our male dancers.

BTC: What is your favorite Taylor Swift song and why?
ES: “Wildest Dreams” because it’s so beautiful, romantic, and leaves you questioning.

BTC: What is your favorite non Taylor Swift song and why?
ES: I love Jason Pritchett’s new song, “Good Show.”

BTC: Where do you go when you leave Branson?
ES: I will be performing for five months in Las Vegas with Legends in Concert.

The following was from a short interview conducted by telephone on March 28, 2016, to bring things current:

BTC: How did the Las Vegas gig go and what have you been doing since you left Branson?
ES: It went great and I have, been working with Legends in Concert since I left Branson. Currently, I am doing a spring engagement with them at Myrtle Beach.

BTC: When will you be returning to Branson?
ES: I finish up in Myrtle Beach and then come to Branson for the most of the summer season starting June 1.

BTC: Are you looking forward to coming back to Branson?
ES: I absolutely love Branson and am so excited about coming back.

Jeannie Horton, General Manager of the Legends in Concert in Branson, said that they are just so excited to have Elizabeth back with her Taylor Swift tribute for the summer season because it’s a perfect fit for the younger family audiences that normally attend at that time of the year. Horton points out that the Taylor Swift tribute will be performed from June 1 through August 15.

For additional information or tickets for the Legends in Concert  show contact the Branson Tourism Center, one of Branson’s largest and most respected vacation planning services by calling 1-800-785-1550 or through its website, www.BransonTourismCenter.com .