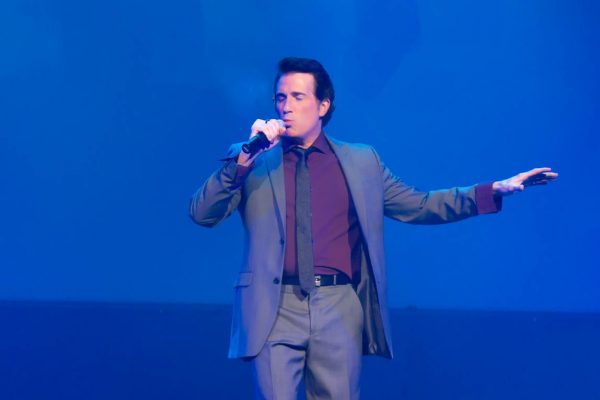 George Dyer performing “How Sweet It Is To Be Loved By You.”

Even as he sings his signature closing number, Time To Say Goodbye, if you are like me, and many others who have experienced the amazing George Dyer and his family perform in Branson, you are not ready for the show to end. His magnificent rich tenor voice is just a joy to hear as he covers a variety of music as only he can. Dyer’s amazing singing would be enough, but when combined with his personality, interaction with the audience, the unique way he introduces each number, one of the best live bands in Branson, and his extremely talented family, the end result is a wonderful and unique musical entertainment experience. 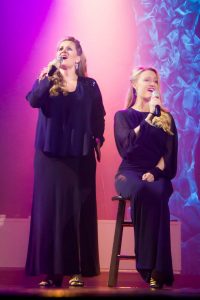 Before we get to George, let’s look at some of the other major aspects of the George Dyer Show. George’s wife Clarisse, son Garrett, and daughter Kendra are all extremely talented, both individually and in combination with other family members, add another entertaining element to an already great show. Whether it’s Garrett and George performing a one of the funniest and entertaining exercise routines I have ever seen, while singing a Dean Martin/Frank Sinatra medley; Kendra’s unique version of I Dreamed A Dream from “Les Misérables;” George and Clarisse’s wonderful performance of Somewhere Out There, from “An American Tail;” or something else, each is performed beautifully.

My favorite family number was the trio of Clarisse, Garrett, and George singing Hallelujah. It was as inspirational as it was beautiful; a special moment that showed not only the innate vocal talent of this family, but allowed a glimpse into their commitment to each other and the One whom they serve. 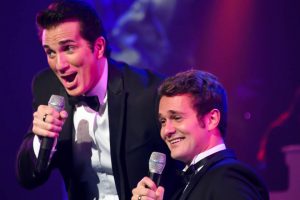 George and Garrett Dyer during their unique and entertaining Dean Martin/Frank Sinatra medley.

To say the show’s band was outstanding would be an understatement. Long time guitar player, Bogie Bohinc plays guitar and is also the band director, with Will Clarke on keyboards, Daniel Dossey on drums and percussion and Shaun Munday on Bass. These guys play it all, from country to opera and everything in between, adding an exciting musical dynamic to the show that only musicians of their caliber can. Munday even displays his considerable vocal talents as he is featured singing the James Brown hit, It’s a Man’s World. A change of tempo by itself, gets even more so when Shaun is joined by George resulting in one of the most unique and entertaining renditions of that song ever.

I have previously described George Dyer as “Branson’s tenor extraordinaire.” His magnificent rich tenor voice is just a joy to hear as he covers a variety of music from country to Broadway, pop, rock, opera, and more. It doesn’t end there however, as his ability to connect to his audience and draw them into the performance with a genuine charisma and warmth provides a unique, amazing, and unforgettable entertainment experience not available anywhere else in Branson. From among many, three of my personal favorite performances would be Bring Him Home from “Les Misérables,” They Call the Wind Mariah from “Paint Your Wagon,” and How Great Thou Art.

Although the vast majority of the show has no opera in it, and every song George sings is a joy to hear and experience, why he is “Branson’s Tenor Extraordinaire,” takes on a special relevancy when he sings opera. Nowhere is that better demonstrated than when he ends the first half singing the popular “Nessun Dorma” from Puccini’s opera “Turandot.” It was magnificent!

The George Dyer Show is a one of a kind Branson musical entertainment experience that should not be missed. For additional information or tickets for the George Dyer Show, or any of Branson’s other shows and attractions, or for lodging arrangements, please feel free to contact the Branson Tourism Center, one of Branson’s largest and most respected vacation planning services by calling 1-800-785-1550 or visiting www.BransonTourismCenter.com.