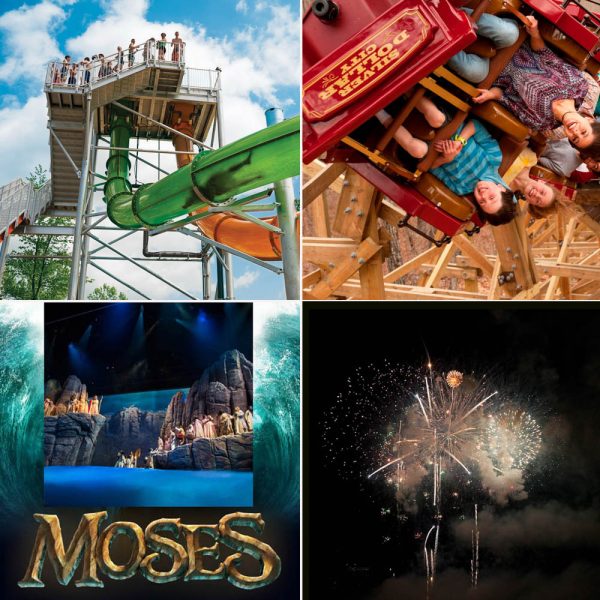 “KaPau Plummet” at White Water, Silver Dollar City’s “Outlaw Run,” Sight and Sound’s “Moses” and Fireworks are just part of the fun and excitement in Branson over Memorial Day Weekend!

“Summer doesn’t officially start until June 21st, but in terms of Branson’s Summer Season, it starts over Memorial Day Weekend,” said Preston Garrison, the Director of Operations for the Branson Tourism Center, one of Branson’s largest providers of tourism services and information. “From its pristine lakes and beautiful Ozarks scenery, to its shows, attractions, and dozens upon dozens of other activities Branson is ready to share the fun, adventure, and excitement of summer with its visitors,” he added.

Although there’s literally hundreds of awesome reasons to plan to spend any summer weekend or vacation in Branson, here’s a list of five that specifically focus on Memorial Day Weekend:

1. White Water, Southwest Missouri’s largest water park, opens with two million gallons of cool wet fun ensconced in a 13 acre Polynesian themed “island” in the middle of the Ozarks. Its $1.7 million thrill ride, KaPau Plummet, launches riders from a drop-floor four stories in the air into a 70-degree plunge into a thrilling 240-foot spiraling loop slide to the bottom, and that’s just one ride! When you add in the iconic seven story multiple slide Kalani Towers; Aloha River at Hula Bay, with “over 800 feet of unexpected twists and turns, fountains, misters, bubblers, geysers, and a 30-foot tall tiki water tower; and so much more, it’s easy to understand why White Water is sometimes referred to as “Mid-America’s Nearby Island Adventure.”

2. Branson’s Pristine Lakes, Table Rock Lake, Bull Shoals Lake, and Lake Taneycomo are a virtual aquatic paradise offering boating, swimming and a wide range of other water sports and activities, along with some of the finest bass and trout fishing anywhere. There are many opportunities to experience the beauty and relaxation of Branson’s lakes such as by boat, canoe or kayak; walking along the Branson Landing Boardwalk; hiking one of the many lakes trails; sitting on a sandy beach, or while cruising aboard cruise boats such as the Showboat Branson Belle, Main Street Lake Cruises Lake Queen or Landing Princess.

3. Fireworks will light up the Memorial Day Weekend sky over the Ozarks in two major firework displays at dusk on Sunday evening, May 29. One display will be at the Chateau on the Lake, as part of its Memorial Day Celebration, and the other at Big Cedar Lodge, as part of its Patriotic Picnic and Fireworks event. The public is invited to both; with the best views from Table Rock Lake, the property’s grounds or, in the case of the Chateau on the Lake, the peninsula area located just north of the Table Rock Dam to the west of its auxiliary spillways.

4. Moses, Sight and Sounds newest spectacular biblical production to perform in Branson, “is the most spectacular, technologically advanced, show that Sight & Sound Theaters has ever put on stage,” said Mike Pitman, the Business Development Manager for the theatre. This powerful and epic biblical story follows Moses on his quest for personal identity that would change the course of human history. Journey back to that time with your family and witness some of the greatest moments in biblical history; experience the exhilaration and celebration of the Israelites as they brush past you on their path to freedom; feel God’s awe-inspiring power as you sit in the midst of the parted Red Sea, and the moment He first speaks to Moses at the burning bush, all presented as only Sight and Sound can depict.

The iconic $1.7 million dollar Titanic violin, played by bandmaster Wallace Hartley as the Titanic sank, on exclusive exhibit at the Titanic Museum Attraction through May 29.

5. The Titanic Museum Attraction’s exclusive Branson presentation of the $1.7 Million Dollar Bandmaster Titanic Violin through May 29. “RMS Titanic bandleader, Wallace Hartley’s violin has become the iconic symbol of the Titanic saga. Found strapped to his body after the sinking, it was returned to his wife-to-be, only to be lost to the world until it resurfaced almost a century later. Now, for the first time since an unnamed owner took possession of the violin, visitors to the Titanic Museum Attractions will be able to experience for themselves, the overwhelming sense of emotion it evokes,” says Mary Kellogg-Joslyn, co-owner of the Titanic Attractions.

And that doesn’t include all the rest of the fun, excitement, adventure and live shows that Branson is noted for. BTC’s Garrison points out that Memorial Day Weekend is not only the start of Branson’s Summer Season, but one of the busiest weekends of the year. He suggests advance reservations for shows and lodging to ensure not only availability, but the best seating and accommodations. For additional information on Branson’s Memorial Day Weekend activities or information on tickets for any of Branson’s shows and attractions or for lodging arrangements please contact the Branson Tourism Center by either calling their toll free number 1-800-785-1550 or through their website www.BransonTourismCenter.com.