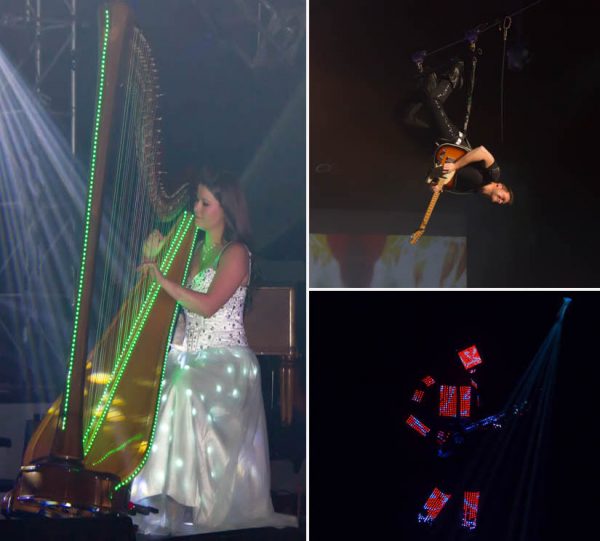 Beauty, talent, and elegance, upside down high flying excitement, and extraordinary special effects are just part of what makes The Haygoods such an amazing entertainment experience for the whole family!

Based on over 30 years of seeing Branson shows and having seen the show on May 6, I can testify to the fact that it’s, “Really terrific!” The Haygoods show is a WOW, WOW, and WOW, on a Three WOW Index with three WOWs being as high as you can get! From the “Get go,” its two hours of the most unique, innovative, talented, energetic, personable, and exciting entertainment you will ever experience on a Branson stage.

An indication of just how special this show was going to be happened during the pre-show being presented by the extremely talented Cabot High School Jazz Band, from Cabot, Arkansas. Many Branson shows work with schools and other groups and give them the opportunity to perform a pre-show on their stage, that’s not unusual. I’ve seen many, but I have never seen one of the stars of the show come out and perform a complete number with those doing the pre-show. Imagine how surprised and delighted the audience was when Dominic Haygood came out and was featured with them on the saxophone playing “Somewhere Over the Rainbow.” It wasn’t just that he did it, within 15 minutes of the start of his own show, but the way he did it. The effort he put into the performance kind of set the tenor for the quality and heart of the entertainment that the Haygoods were about to present and, WOW, did they ever present it!

It’s first and foremost a music show with impeccable vocals and instrumentality presented by the six Haygood siblings, five brothers, Timothy, Patrick, Dominic, Michael, and Matthew; their sister Catherine, and drummer Dino Phillips, but it is so much more! Their very first number, Lionel Richie’s song, Dancing on the Ceiling, set the bar, not only vocally and instrumentally, but in terms of the show’s, excitement, energy, and audience expectation, not only with the way they performed the number, but the dramatic entrance of Michael Haygood from “the ceiling;” and that bar went nowhere except up from there! 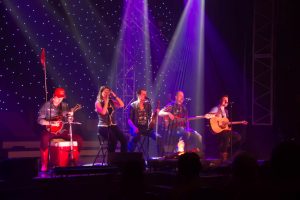 The Haygoods, Timothy, left, Catherine, Dominic, Matthew, and Michael performing “Will the Circle Be Unbroken?

Some sibling singing groups are blessed with a God given sound that makes their harmonies a joy to hear. The Haygoods have that blessing along with an instrumental talent that is amazing. When the Haygoods combine the two, a synergy is created that just has to be experienced to be believed. Except for intermission, they are on the stage for the whole two hours either playing, dancing, singing, or interacting with the audience. From a primary instrumental perspective Timothy plays fiddle and banjo; Dominic, fiddle and saxophone, Matthew, bass, Michael Guitar, Patrick, keyboard, and Catherine, who, playing the most instruments of all, plays anything from the harp to the fiddle. 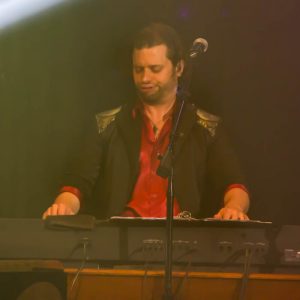 You don’t see Patrick Haygood “center stage” a lot, but he does a great job on the keyboards and impacts so much on just about every number in the show.

Musically, what makes this show so terrific is not just that some very talented performers are singing or playing. It’s the total experience that results when their entire skill and talent set is blended together with special effects and choreography, making each set a unique and amazing entertainment experience in a show where, although there is no individual star, each number sparkles brightly amid a Haygood galaxy of constantly changing stars. The show’s filled with WOW numbers, but three of my personal favorites were Born to Fly, with Catherine on vocals, featuring Dominic and Tim on the fiddle and banjo respectively; Cotton Eyed Joe as it literally lights up the stage , not only with great singing and playing, but some of the most marvelous and exciting specific effects I have ever seen on a stage during a live musical show in Branson; and the performance of Always On My Mind featuring Michael on vocal, Patrick on piano, and Dominic on the sax.

The music would be enough on its own, but there is a high energy tap dancing routine, special effects and lighting the likes of which you will not see on any other Branson stage, and the way the Haygoods interact with their audience, from a personal history perspective as well as from a light comedy and “drama” point of view. Even now however, I have to wonder just why the show’s producer, Dominic Haygood, won’t give “Banjo Boy” his moment of fame, especially after the support he gets from the audience and the dramatic way he “flies in” to start the second half of the show?

The music, energy, action, and special effects of The Haygoods show will captivate and hold the interest of all adults and most children simultaneously throughout the show. As the ads say, “Where else can you check out a guitar-playing LED robot rocking’ out to ‘The Cotton Eye Joe’” or “see an amazing harp player performing in a magical light up dress.” In a town filled with great live entertainment, this show is a WOW on so many levels. It should not be missed!

For additional information or tickets for The Haygoods or any of Branson’s other shows and attractions, or for lodging arrangements, please feel free to contact the Branson Tourism Center, one of Branson’s largest and most respected vacation planning services by calling 1-800-785-1550 or visiting  www.BransonTourismCenter.com