The Osmonds and Lennon Sisters opening the 2015 edition of the “Andy Williams Christmas Extravaganza.”

The Andy Williams Christmas Extravaganza and Shoji Tabuchi’s “Wonder of Christmas” Christmas show are two of Branson’s longest running shows devoted totally to Christmas. The have become a Christmas tradition to many and the perfect illustration of why Christmas in Branson is The Most Wonderful Time of the Year!

The Andy Williams Christmas Extravaganza continues the tradition of “Mr. Christmas” and the “Andy Williams Christmas Show” with its variety, color, and excitement. During separate interviews, Jimmy Osmond and the Lennon Sisters, both of whom worked very closely with Andy Williams during their careers, expressed what an honor it was to remember and honor him by continuing his style of Christmas show, and, if last years’ show was any indication, WOW, do they ever!

Produced by Jimmy Osmond, the Andy Williams Christmas Extravaganza is a spectacular, unique, and magical Christmas production that is as beautiful and inspiring as it is entertaining, exciting, magical, and fun. From the opening to the finale it’s an amazing variety of music, dancing, color, magic, and more that entertains and inspires as it has the audience sitting on the edge of their seats anticipating what’s coming next.

The vocal stars of the show, the Osmonds and Lennon Sisters, present the music of Christmas as only they can! It is a joy to see and hear them sing individual group sets, solos, and group duets in one of the most unique vocal performances you will ever hear. An already great experience becomes even more so with the addition of dancers, a live band, colorful costuming, special effects, and more.

That would be enough for most shows but, in keeping the Andy Williams tradition of variety, there’s more, a lot more! When you add the amazing magic of illusionist Rick Thomas and his lovely wife Tara, with elements of their magical “Let It Snow” act, the adagio dancing and quick change artistry of Pasha & Aliona, and other surprises, the result is like opening Christmas presents under the tree on Christmas morning. You don’t know what it is, but what a wonderful surprise it is when you get the wrapping off and open the package.” 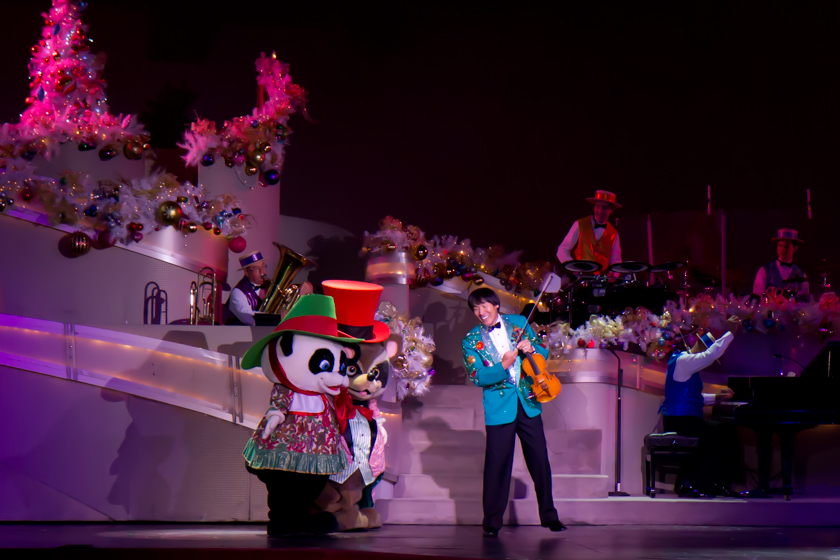 In a recent interview, Shoji Tabuchi said that their Christmas show, The Wonder of Christmas, playing from November 1 through December 10, differs from their regular show in that, from the opening curtain to the finale, everything is about Christmas. Christina Tabuchi said, “It’s just so exciting as we transition over from our regular show to the Christmas show. There’s a special spirit, energy, and feeling of anticipation as we put the final touches on the show and get ready for our November 1st opening.”

The show will feature the stars of their regular show, the incredible Shoji Tabuchi; his daughter Christina who is the lead female vocalist, the shows co-producer, and co-dance captain; a live band; dancers; other vocalists; and the return of mandolinist Sharlyn Todd performing a variety of everyone’s favorite Christmas music in the type of production show for which the Tabuchi’s are famous.

That means the incredible Shoji Tabuchi playing a variety of Christmas favorites on the fiddle and violin as only he can, stirring vocals, marvelous dancing, colorful costumes and sets, and other surprises that have made this Christmas show a Branson tradition. From toy soldiers, to snowmen and the birth of the One whose birthday we celebrate on Christmas, this show is filled with the spirit, excitement, and inspiration of Christmas and has something for the whole family to enjoy.

When asked what his favorite part in the show was, Shoji said, “When the kids in the audience come up on stage with Christina as she sings to them. Just to see the expressions on their face!” In a separate interview, when asked the same question and without knowing it had been asked to her dad, Christina said, “When the kids in the audience get to come up on stage and I get to sing ‘Frosty,’ with them.”

When pressed to pick a favorite part of the show that he was involved in he said that it would have to be the Little Drummer Boy and the Parade of the Wooden Soldiers set. He sets it up playing the Little Drummer Boy on the fiddle that fades into a full cast, dressed as wooden soldiers, performing the Parade of the Wooden Soldiers, live on drums, as they precision march and dance. Shoji said that he also enjoys the unique multiple style approach he uses to play Joy to the World in the show. He said that they are both audience favorites and, having seen the audience reaction to them in previous shows, I couldn’t agree more.

For more information or tickets for either Andy Williams Christmas Extravaganza or Shoji Tabuchi’s Christmas show, or anything relating to Christmas in Branson, please call one of Branson Tourism Center’s Branson based Travel Planners at 1-800-875-1550. They will be delighted to answer any questions you might have about Branson, its shows, hotels, or attractions and assist you with reservations to help ensure that you obtain the best available seating at shows and the accommodations you desire. There is no charge for this service and they are available daily, except Christmas Day, from 8:00 AM to 9:30 PM.