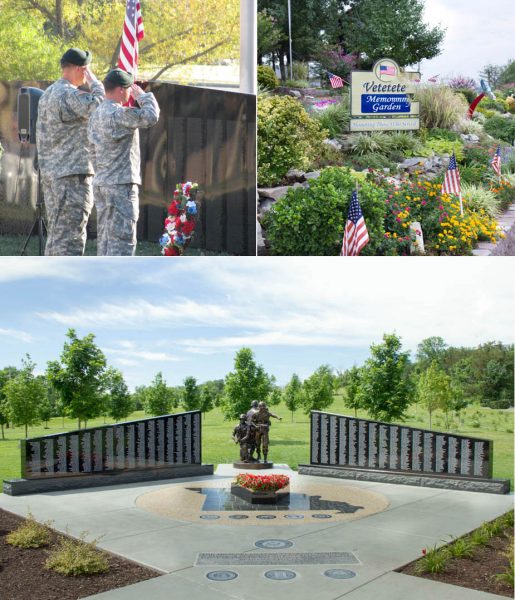 “Branson’s Veterans Homecoming Week is America’s biggest ‘Veterans’ Day’ tribute, running form November 5 through November 11 each year,” said Annette Wood, the Director of Sales and Marketing for the Branson Tourism Center. “The seven-day event is both a tribute and a celebration, filled with a variety of activities, shows, reunions, and highlighted with the Veterans Day Parade, through historic downtown Branson starting at the 11th Hour of the 11th day of the 11th month. Here’s a short list of three unique stand-alone things that we believe Veterans and their families will find inspiring and should not miss while in Branson,” she added.

Nestled within the beautiful and peaceful Welk Resort Branson, the traveling Vietnam Veterans Memorial, more commonly known as “The Wall,” will be on display and open to the public for public viewing at the Welk Resort Branson from 8:00 AM to 6:00 PM November 7- 13th. Although the Welk Resort had hosted the traveling replica Memorial for many years, it purchased it in 2013. “It is with a sense of gratitude and honor that the Welk Family and The Welk Resort sponsor this tribute,” said Dathan Atchison, General Manager of the Welk Resort. “We cannot ever forget the incredible sacrifice of so many to insure the liberty we enjoy in this country.”

“The Wall” is the most visited memorial in Washington, D.C. The official half-scale replica spans nearly 240 feet in length and lists more than 58,000 names of the nation’s fallen heroes who fell in the Vietnam conflict. A special locator book will be available to assist visitors in finding specific names.

The Lennon Sisters will be performing at a special Opening Ceremony for The Wall that will be held at the Welk Resort on Monday, November 7, at 10:00 AM. A POW/MIA Service of Tribute and Remembrance will be held at The Wall at 8:00 AM on November 8.

Under the guidance of Master Gardner Ben Kinel and with the considerable effort of many volunteers and benefactors who have given money, land, materials and a lot of hard work, time and effort, the beautiful garden serves as a living tribute to the sacrifices of America’s Veterans, active duty military personnel and their families. Located in the northwest corner of the intersection of Roark Valley Road and State Highway 76 at the traffic signal, the garden is very visible to all those traveling into and out of the Branson Strip on State Highway 76.

Although thousands drive by it daily, and comparatively speaking, it’s smaller than many memorial gardens, it is well worth the effort to stop and walk through it. To get to parking, turn on to Roark Valley Road at the stop light at its intersection with Highway 76, go one block to Crosby, turn left, circle around the church. Turn left at the stop sign at Main Street and proceed to the church parking lot.

Located at the entrance to the College of the Ozarks, the Official State of Missouri Vietnam Memorial honors the 1,410 servicemen and women from Missouri who gave their lives in that war. Designed by Austin Meyer, a 2014 College of the Ozarks graduate, and dedicated on April 22, 2015, every element, from its divided wall representing a divided nation to the red roses in a “V” shaped flower bed, representing valor and the blood that was spilled by Missourians on behalf of our nation, represents and honors their sacrifice. Take first Hollister exit off Highway 65, south of Branson, and follow directions to the College of the Ozarks. The Memorial and a large flat parking lot are immediately to your left as you drive up to the entrance.

In addition, the “Lest We Forget” 9/11 Memorial, containing a remnant of one of the steel columns from the World Trade Center, is located next to the C of O Fire Department on James Forsythe Drive inside the campus. The mangled steel column in the memorial was donated by retired police officer Tommy McHale to honor the 37 fallen men and women officers from the Port Authority for New York and New Jersey who perished on 9/11.