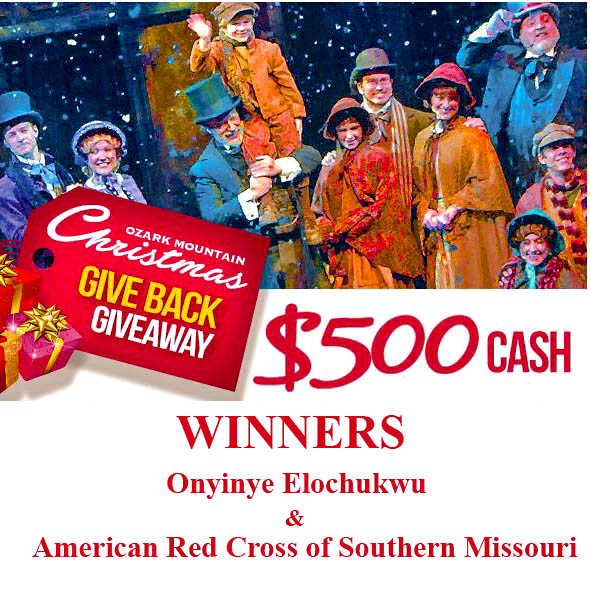 Two “Winners,” Onyinye Elochukwu,” who won the $500 Grand Prize and the American Red Cross of Southern Missouri, who was designated by her to receive an additional $500 from the Branson Tourism Center.

When Mrs. Onyinye Elochukwu, of Sacramento, California, went to open her email on the morning of December 12, she certainly didn’t expect to find out that she had won Branson Tourism Center’s 2016 Ozark Mountain Christmas Sweepstakes. She said, “When I opened my email and found out that I had won I was so excited! I read it twice before I even grasped that I had won.”

Onyinye, a stay at home mom taking care of a two-and-a-half-year-old son, entered the contest through Facebook and really didn’t think she had a chance to win. Now that she’s won, she said, “I’m so grateful. It couldn’t have come at a better time; what a wonderful Christmas gift!”

Johnson also points out that another important element of the Sweepstake was that the Winner was empowered to brighten the Christmas of a local Branson charity by designating it, from those listed, to receive a gift of $500.00 from the Branson Tourism Center. Onyinye, who has never visited Branson, but hopes to do so someday, selected the American Red Cross of Southern Missouri because she is more familiar with the Red Cross saying,” I see what they do on TV, on-line, and in social media and I like what they do to help people in times of need.”

Stacy Burks, Executive Director of the American Red Cross of Southern Missouri said, “We’re so grateful to Mrs. Elochukwu and the Branson Tourism Center for thinking of the American Red Cross during this season of giving. Our volunteers are ready to go when disaster strikes whether home fire, flood, or tornado and this donation will help provide relief and help to community members during their time of need.”