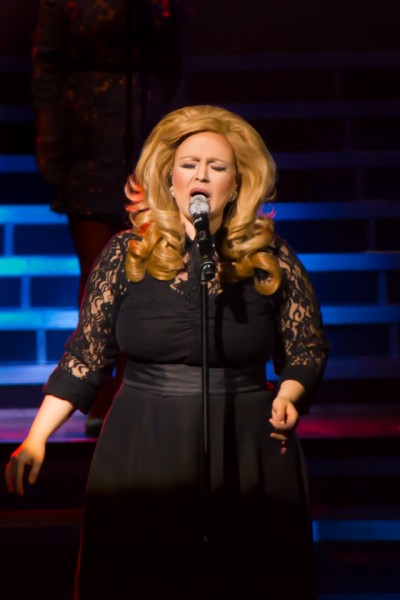 J.C. Marie during her Legends in Concert Adele Tribute .

How did the question, “Can we call you Mrs. Adele,” help J. C. Marie create a Legend? Read on to find out and don’t miss her Adele tribute in the world renown Legends in Concert show, in Branson, March 26 through May 16.

“Branson – Up Close and Personal,” is a service of the Branson Tourism Center. It provides readers with an interesting and up-close look at a Branson star or personality in a concise Question and Answer format.

BTC: Where were your born and when?
JC: French Camp, California in 1980.

BTC: When did you first start singing?
JC: I have been singing for as far back as I can remember.

BTC: What were the circumstances?
JC: Both my parents and older sister sang. I can remember singing for a group of a few hundred people, when I was about seven years old. We sang for a church in California as part of a group called the “Missionettes.”

BTC: When did you first realize that you wanted to make a living singing?
JC: Around my senior year in high school. I realized that I loved performing, musical theatre, and wanted to pursue it when I went to college.

BTC: What college did you attend?
JC: Azusa Pacific University.

BTC:  Did you receive a degree from Azusa Pacific?
JC: I sure did, a BA with a major in “English” and minor in “Drama/Theatre.” I thought that teaching would be a great fall back job if I couldn’t make it as a performer. Except for substitute teaching between “gigs” I haven’t had to fall back on it yet.

BTC: Where was your first professional gig?
JC: I started auditioning in the Los Angeles area and ended up doing a small 99 seat theatre production of the “Man of La Mancha.”

BTC: When?
JC: Right after I graduated college in 2002

BTC: Between then and becoming an Adele Tribute Artist how did you spend your time developing professionally?
JC: Performing aboard cruise ships and doing professional Christmas caroling. The caroling was in a capella quartets, dressed in full Dickens regalia, at Disney Parks, hotels, celebrity parties, and other places.

BTC: Did you study at Oxford in England?
JC: I did! During my junior year in college I did one “Study Abroad Semester” at Oxford.

BTC: Did your substitute teaching have anything to do with you deciding to become an Adele Tribute Artist?
JC: Yes. After working on cruise ships for several years I was trying to find a job in Las Vegas. While auditioning, I did substitute teaching. In late 2011, while doing a long-term sub in a high school Spanish class, some students said I looked like Adele and asked if they could call me “Mrs. Adele.” I looked Adele up on my I Phone and saw the likeness.

BTC: How did that likeness end up in you becoming an Adele Tribute Artist?
JC: It must have been in the stars. I heard Legends in Concert was having an audition in a few weeks. At the same time I made the discovery that the substitute teacher in the next class room had been a production manager for Legends in Concert. With his help and advice, I studied her mannerisms, singing style, accent, and worked perfecting my technique on the songs I wanted to use for the audition.

BTC: How did the audition go?
JC: The January 2012 audition was an “open call” for dancers. I had to dance, but when I finished, I asked if I could audition Adele for them. They said, “Yes.” I waited two hours while they finished the rest of the “dance call,” and auditioned. Within two days I got a call to come in and audition for the CEO. I did and they offered me Atlantic City for the summer. That gave me about three or four months to put my act together and go on stage.

BTC: What specific efforts do you go through to recreate Adele’s mannerisms, style, and vocal characteristics to provide as authentic an Adele experience as possible for your audiences?
JC: Thank God for You Tube! I have studied hundreds of hours of her videos, to learn her mannerisms, looks, and style. I even draw three of her visible tattoos each day. Besides my vocal warm-ups, which I combine with putting on my makeup, I spend about 45 minutes to get ready for my set.

BTC: What is your personal favorite Adele song?
JC: It’s “One and Only.”

BTC: Based on your feel of audience reactions to your performances, which Adele song is the audiences favorite?
JC: Right now, “Hello.”

BTC: Do you do gigs outside of Legends in Concert?
JC: Not many because Legends has kept me so busy.

BTC: Outside of Adele, if you could perform or meet with any entertainer/person (living or deceased) who would it be and why?
JC: I’m a huge musical theatre fan, so it would be Barbara Streisand

BTC: What kind of summer stock would you most like to perform if time permits?
JC: Musicals. My dream show would be “Into the Woods.”

BTC: In the Legends in Concert Christmas show you sang “Silent Night.” How did you decide on that?
JC: Adele hasn’t recorded any Christmas songs, but she has mentioned Etta James as one of her influences. The version of “Silent Night” I sing is an Etta James arrangement.

BTC: Adele or not, what is your personal favorite song?
JC:  Barbara Streisand singing, “Don’t Rain On My Parade” from “Funny Girl.”

BTC: When did you first perform in Branson?
JC: During the spring of 2014

BTC: Had you ever been to Branson before that?
JC: No.

BTC: What is your first impression of Branson?
JC: It’s surrounded by natural beauty.

BTC: What’s your favorite thing to do in Branson when you are not performing?
JC: I love Silver Dollar City!

BTC: Where is your favorite place to eat in Branson – Favorite dish?
JC:  Wakyoto Japanese Restaurant across from Walmart. I love their Sushi.

BTC: In your career, of all the performances you have made and you have been in, no matter how big or small, which one personally meant the most to you and why?
JC: Playing the role of “Dolly” in Hello Dolly” during my senior year in college. It was amazing!

BTC:  Do you have a favorite hobby or activity and what is it?
JC: Sit around watching movies. I love movies.

BTC: Do you have a “little known” fact about yourself that you think our readers would enjoy?
JC: I’m addicted to chap stick and use it multiple times daily.

BTC: What part of your show/act do you enjoy performing the most and why?
JC: I love the talking bits and laughing between my songs.

BTC: How do you feel about performing in Legends in Concert?
JC: I love it. The show’s concept has something for everyone and leaves the audience wanting more.

Legends in Concert starts its legendary 2017 Branson Season with its spring lineup, running from February 3 through May 16. The all-star lineup starts with George Strait, The Temptations, The Blues Brothers™ and Elvis Presley. Guest Artist Prince joins them starting February 16, Adele  March 26, and Michael Jackson joining them from May 12 through May 16.

For more information or tickets for the Legends in Concert, or any of Branson’s other shows and attractions or lodging, please contact the Branson Tourism Center at 1-800-785-1550. One of our  Branson based Travel Planners will answer your questions and help with reservations and getting the best available show seats and lodging. There is no charge for this service and they are available daily, except Christmas Day, from 9:00 AM to 8.00 PM.