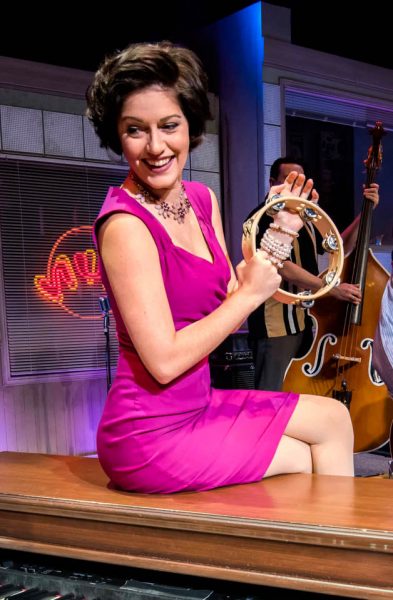 The smash hit show Million Dollar Quartet, at the Welk Resort Theatre in Branson, tells the story of one of the greatest jam sessions in rock n’ roll history. A unique, impromptu, and one time jam session including four young recording legends-to-be: Carl Perkins, Elvis Presley, Johnny Cash, and Jerry Lee Lewis. The events of what took place in the storefront recording studio of Sun Records on December 4, 1956, come to life on the Branson stage in a wonderful musical production for the ages.

Also there that night, was a young lady who was with Elvis Presley. That presence provides the basis for the character “Dyanne” in the show.  This edition of Branson Up Close and Personal, is with Sarah Tweedle (ST) who plays the role of “Dyanne” in this “ground shaking” not to be missed Branson production

“Branson – Up Close and Personal” is a service of Branson Tourism Center (BTC), one of Branson’s largest and most respected vacation planning services. It uses a “Question and Answer” format to provide readers with an up close and personal look at a Branson star or personality. The interviews are conducted for the Branson Tourism Center by Gary Groman, a 31 year resident of the Branson area, local columnist, and freelance writer.

BTC: Outside of your Dad, if you could perform or meet with any entertainer/person (living or deceased) who would it be and why?
ST: Judy Garland 100 %! The first movie I remember watching as a kid was the “Wizard of Oz.” My dad bought it and we would watched it over and over and over again. I absolutely feel that it inspired me to become an entertainer.

BTC: Where was your last gig before theMillion Dollar Quartet
ST: My husband and I were working for Carnival Cruise Lines cruising the Caribbean.

BTC: When did you get married?
ST: I married my husband Drew on May 10, 2015. We have known each other since elementary school.

BTC: Is he an entertainer too?
ST: He’s a spectacular guitar player. He plays in the Eagles Tribute Concert and the Lynyrd Skynyrd & Suthyrn Fryd Frynds Tribute shows at the Tribute Theatre.

BTC: Where is home?
ST: Branson.

BTC: When did you first hear about the musical Million Dollar Quartet?
ST: I was a musical theatre major. My first introduction to the Million Dollar Quartet was in 2010 when I was watching the Tony Awards with my family. It was nominated for a Tony Award as “Best Musical” and one of the actors [Levi Kreis] won the Tony for “Best Featured Actor in a Musical” for his role as Jerry Lee Lewis in the show.

BTC: Where did you audition for the Million Dollar Quartet?
ST: In my living room.

BTC: How did that come about?
ST: I had heard about the role opening up while we were on the cruise ships. We didn’t get back until the end of October 2015. I was a little burnt out and kind of wanted to rest a bit before making any decisions about what to do next, but I kept on hearing about the role. In early 2016, I decided to get in touch with people I knew at the theatre. They sent me some songs and scenes and asked me to set up a video camera in my living room and record myself. I did, sang “Fever” and “I Hear You Knocking,” read a scene, and sent them to Chris Cathcart, the show’s Production Manager. A couple of days later I went in for a meeting. Shortly after the meeting I was offered the part.

BTC: They used the real names of everyone else in the show. Why do you think that they used the name “Dyanne” instead of her real name, “Marilyn,” in the show?
ST: That’s an interesting story. Elvis actually did bring a woman, Marilyn Evans, with him that night. In “The Picture,” if you zoom out, she is sitting at the end of the piano. Her involvement in the jam session was minimal except for the fact that she had come with Elvis. The producers of the show developed a new character, “Dyanne”, who sings and adds an additional dimension to the show that would otherwise not be there.

BTC: What did you know about Marilyn Evans prior to deciding to audition for the Million Dollar Quartet?
ST: I had seen the picture with her in it, but didn’t really know anything about her.

BTC: What is your favorite Elvis Presley song? Why?
ST: “Can’t Help Falling In Love” because of its beautiful message.

BTC: What do you like most about playing “Dyanne” in the Million Dollar Quartet?
ST: There’s two things. The first is that everything she does, vocally and music wise, is different from the last thing she did. “Fever” is quiet and sultry, but “I Hear You Knocking,” is big and I get to wail on some stuff. In “Peace in the Valley” I get to sing with the boys, and I get to use some of my classical training in some of the backgrounds such as “Ghost Riders in the Sky.” The second thing I love is that I have the best seat in the house. I get to sit on stage every night and get to watch my incredibly talented cast mates “rock and roll.”

BTC: Whether you’re in it or not what’s your favorite part of the show?
ST: I really love the Concert Finale. I’m not even on stage, but when the jackets come down and the boys go into their finale it’s a joy to experience the audience’s excitement and reaction!

BTC: Why should someone coming to Branson plan to see the Million Dollar Quartet?
ST: It’s a beautiful top notch production, full of fun and timeless music, telling a story that entertains and spans generations. There’s nothing else like it in Branson. And be ready, because once you see it you will want to come back and see it again!

BTC: In your career, of all the performances you have made and you have been in, no matter how big or small, which one personally meant the most to you and why?
ST: In 2013 my dad [John Tweed] and I did a show called “Reelin’ in the Years” that we had developed together. It was toward the end of the season and my brother Jacob, who is my best friend and who had never performed on stage with us, did. He came out on stage and sang, “Have Yourself A Merry Little Christmas” as my dad played guitar and I just sat next to them crying.

BTC: Where were you born?
ST: Costa Mesa, California

BTC: Was there something special about your childhood that you think our readers would be interested in?
ST: Just that I was blessed growing up in a family surrounded by music.

BTC: When did you realize that you wanted to sing professionally?
ST: When I was 14 we went to New York City and I saw “Beauty and the Beast” on Broadway. I remember walking out of the theatre and matter of factly saying to myself, “I think I’ll do that!”

BTC: Do you have any formal training in theatre or acting?
ST: I’m a graduate of the two year “Musical Theatre Program” of the “American Musical and Dramatic Academy” in Hollywood, CA. I loved it because most of the teaching staff were working professionals.

BTC: When did you first perform in Branson?
ST: When we moved here in April of 1995.

BTC: What was you first impression of Branson?
ST: I was just seven years old when we moved here from Los Angeles. I thought it was exciting and had a lot of fun things to do.

BTC: What’s your favorite thing to do in Branson when you are not performing?
ST: I sew a lot. My “Happy Place” is in front of my sewing machine.

BTC: Do you have a “little known” fact about yourself that you think our readers would like to know?
ST: I’m such a big Judy Garland fan that I actually wore ruby slippers when I got married and walked down the aisle to “Somewhere Over the Rainbow.”

For additional information or tickets for the Million Dollar Quartet, or any of Branson’s shows and attractions, or for lodging arrangements, please contact the Branson Tourism Center by calling 1-800-785-1550, or by visiting www.BransonTourismCenter.com.