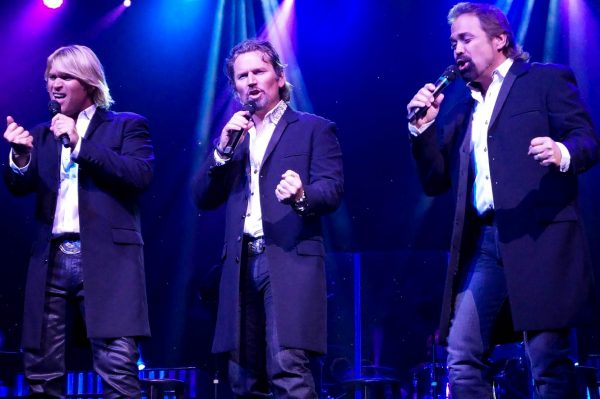 The Texas Tenors meteoric ‘Rise’ to fame is proof positive that “You Should Dream.” Since their national debut on NBC’s hit prime time show America’s Got Talent in 2009, they have become one of the most popular singing groups in America. In addition, to a full concert schedule and many hit recordings, they have filmed two PBS Specials, “You Should Dream” and their newest, which will air shortly, “Rise.”

The Texas Tenors have been entertaining Branson audiences since 2010. Having just seen their 2017 show recently, I can say without a doubt that 2017 is all that, and more! From their first number to the last, the power, beauty, and intensity of each totals up to an unforgettable entertainment experience that should not be missed!

The show is in concert format. And what a concert it is! The Texas Tenors, Marcus Collins, J.C. Fisher, and John Hagen perform many covers and original music. This includes country, classical, gospel, Broadway, and more.

The Texas Tenor entertainment experience is more than just their pure vocal talent, wonderful harmonies, and innovative arrangements. Oh, that’s the focal point, but their innate ability to relate to their audience and get them involved in the performance is a powerful dynamic. When combined and choreographed with a large LED Screen and a great live band, it’s easy to see why this show is one of Branson’s most popular music shows. The band consists of some of the best musicians in Branson including Larry Hensen, Keyboard; Mitch Keirsey, Guitar; and Ryan Hurn, Drums.

In each show piece that I write, I pick three of my favorite numbers to highlight. I confess that’s hard to do with this show because there are so many “favorites.” In any event, here they are and why. My first is the opening number, Alabama’s Play Me Some Mountain Music, because I love the song and the way they perform it. The performance of Vincero Perdero, (I Will Win, I Will Lose,) by J. C. Fisher and John Hagen was something! Although the words are sung in Italian they were displayed on the large screen. The way they sang separate parts and then joined together was magnificent!

The performance of the 1965 hit, That Loving Feeling, honoring “Righteous Brothers” Bill Medley, was another special highlight. It fully integrated the talents of The Texas Tenors, the band, and the giant LED screen into a spectacular performance. Bill Medley’s singing on the screen was synced with the live performance so that it appeared he was actually singing with them. It was a pure joy to see and hear.

I must mention one more, the Eagles hit, Desperado. Like Vincero Perdero , It’s a perfect illustration of how they start a song separately, each adding their own touch, and then come together for a powerful finish. What a beautiful job!

The show flew by and, fittingly ends with Frank Sinatra’s, I Did It My Way. From a The Texas Tenors perspective “Doing It Their way” is two of the finest hours of music you will hear anywhere. It ends all too soon!

Want tickets or more information on The Texas Tenors, or any of Branson’s other shows, attractions or lodging? Contact the Branson Tourism Center by calling its toll free number, 1-800-785-1550, or through www.BransonTourismCenter.com.