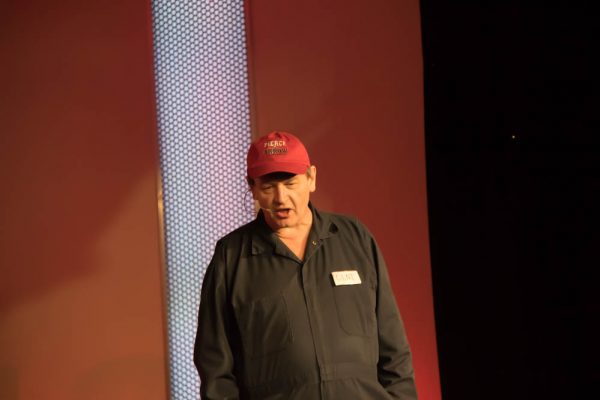 James Sibley, as Janitor Gene Pool, cracking up the audience .

The advertisements for one of Branson’s most popular shows, Pierce Arrow, ask, “Want Funny?” Then they announce, “We got funny!”  After seeing the show recently, I can testify that they do indeed “have funny” and it’s provided by comedian James Sibley. He’s one funny guy!

We interviewed James Sibley (JS) with two objectives in mind. The first was getting a review of the Pierce Arrow show through his eyes. The second, sharing information with our readers that will enable them to know him better.

“Branson – Up Close and Personal” is a service of Branson Tourism Center (BTC), one of Branson’s largest and most respected vacation planning services. It uses a “Question and Answer” format to provide readers with an up close and personal look at a Branson star or personality.

BTC: What is the name of your character in Pierce Arrow?
JS: I am the janitor, “Gene Pool.”

BTC: Have you used that character elsewhere during your career or is it exclusive to the Pierce Arrow Show?
JS: It’s a character that I have developed and used elsewhere throughout my career.

BTC: If you could perform or meet with any entertainer/person (living or deceased) who would it be and why?
JS: It would have to be Elvis. He was one of the greatest entertainers of all.

BTC: What do you like most about being the comedian in the Pierce Arrow Show?
JS: The subtle way the comedy is worked into the show. The shows subtle beginning, using “Gene Pool” as the underdog, and getting the audience’s support against the trials he faces is so much fun!

BTC: Whether you’re in it or not what’s your favorite part of the show?
JS: The last two segments where I get to come out and perform comedy as myself, James Sibley, not “Gene Pool.”  I get to share some of the jokes and standup routines I have developed over the past 25 years and that have made me the comedian I am. 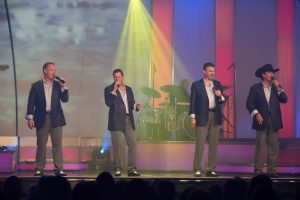 BTC: What’s your favorite musical number in the show and why?
JS: Pierce Arrow’s performance “Way Down.”  It’s not just because it’s an Elvis song and its one of the last he recorded. I love the way they perform it and Dan [Britton] hits those low notes.

BTC: Of all the comedy you do in the show which routine is your favorite and why?
JS: The seamless transition into the start of the show. The routine and interaction between “Gene Pool” and Bobby Blackburn is so subtle and seamless that many in the audience don’t even know that the show has started.

BTC: Where was your last gig before Pierce Arrow?
JS: Carnival Cruise Lines on January 25, 2015

BTC: Where were you born?
JS: Jackson, Mississippi, but I grew up in Shreveport, Louisiana

BTC: Was there something special about your childhood that you think our readers would be interested in?
JS: I had to wear a leg brace every day until I was 11 years old because of a mistake that was made during some simple surgery when I was very young.

BTC: When did you realize that you wanted to be a comedian?
JS: I first realized that I wanted to be an entertainer in high school where I played the trumpet in the band. I started singing in bands when I got out of high school. Then I went into musicals and comedy theatres. That lead to me into doing comedy on the side and into “improv” theatres

BTC: Where and when did you first perform professionally?
JS: It was a one night comedy show in Ashville, North Carolina

BTC: What are some of your favorite career highlights?
JS: Getting the opportunity to know and work with Tim Wilson. I heard him on the radio before I even got into comedy and wished I had the money to go see him. As it ended up, he became my mentor, friend, and we did over 300 shows together. Others were the “Comedy Store” and “Laugh Factory” in Los Angeles in 2005/2006, and getting to meet and work with some of the “Blue Collar Comedy Tour” guys.

BTC: In your career, of all the performances you have made and you have been in, no matter how big or small, which one personally meant the most to you and why?
JS: Doing 15 minutes of comedy with Bill Engvall in Shreveport, Louisiana, for an astronomical amount of money, performing before a hometown crowd of about 10,000.

BTC: When was the first time you were in Branson?
JS: In 2000 when I filled in for Paul Harris.

BTC: What was you first impression of Branson?
JS: That it was like “Bizarro Entertainment World.” Entertainers I remembered from my youth were here in Branson entertaining sold out audiences.

BTC: How did you end up in the Pierce Arrow Show?
JS: When the job opened in Pierce Arrow the timing was right from both a personal and professional perspective. I was working cruise ships when Dan [Britton] made the offer. My wife Viki and I were ready for a change and we made the decision to come to Branson.

BTC: What’s your favorite thing to do in Branson when you are not performing?
JS: We like to go to other Branson shows.

BTC: Do you live in Branson year-round?

JS: We live in Branson 10 months out of the year and in our house in Greenville, South Carolina the other two months.

BTC: Do you have a “little known” fact about yourself that you think our readers would find interesting?
JS: I’ve had bariatric surgery and am about 150 pounds lighter than some folks might remember.

BTC: Anything else you would like our readers to know?
JS: I can guarantee that if you come see the Pierce Arrow Show that you won’t be disappointed. There’s something, a comedy routine, song or songs, that will excite and entertain you. I know you’ll have a great time!

For additional information or tickets for the Pierce Arrow Show, or any of Branson’s shows and attractions, or for lodging arrangements, please contact the Branson Tourism Center by calling 1-800-785-1550, or by visiting www.BransonTourismCenter.com.