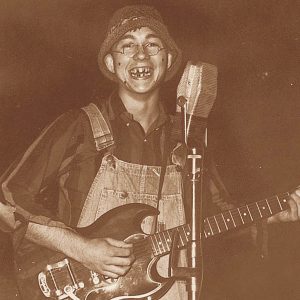 It’s impossible to think of “gut busting” comedy and laughter in Branson without thinking of Gary Presley and his creation, Branson’s favorite comedy character, “Herkimer” performing in  Presleys’ Country Jubilee. He has been bringing laughter and joy to audiences, as the comedic Ozark hillbilly, for over 55 years but, it didn’t start out that way.

While Gary was growing up, his dad, Lloyd, performed throughout the Ozarks with the “Ozark Playboys.” Gary along with the rest of the family regularly went to Lloyd’s performances and along the way, he and his siblings, by their own choice and without formal lessons, taught themselves to play and sing.

His entertainment career started in 1962 playing guitar and performing with his dad and two sisters in the show “Farmarama. It was performed at the 1000 seat auditorium of “Springfield’s Fantastic Caverns” every Saturday night and was recorded for later rebroadcast on Springfield radio station KGBX. The shows emcee and promoter was Loyd Evans, a deejay at KGBX. 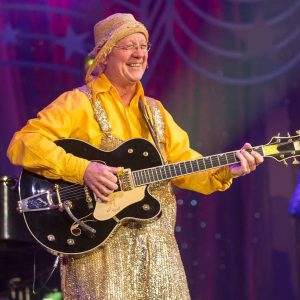 …he just got a lot grayer and lost a lot more hair over the years.

Evans thought the show could use some comedy and Gary, who was 15 at that time said, “Well, I’ll give it a try.” The costume came first, a set of size 50 overalls from one grandpa for his then 130-pound frame; a set of glasses from another grandpa; an old hat; and teeth blackened with an eyebrow pencil.

Evans came up with the name “Herkimer.” Gary believes that Evans was a friend of the Carter Family and that he “picked up the name” from a song June Carter called, “Herkimer the Bull.”

He got his first laughs just walking out on the stage in the costume, liked it, and began adding a few lines and jokes. The rest is comedic history! Since then he has developed and perfected comedy routines and jokes that audiences just love and come back to see time and time again.

That said, what keeps “Herkimer” relevant 55 years later is Gary’s unique ability to keep things fresh and exciting by constantly adding fresh new material and trending topics to his comedy. He keeps “Herkimer” funny and audiences happy and laughing.

How he does what he does it is as important to the audience’s enjoyment as the routines and jokes themselves. His spot-on comedic timing, ad-libbing, and delivery cannot be imitated. When coupled with his ability to communicate his genuine love for people, family, and his craft to his audience, the result is 55 years, and counting, of the most unique, iconic, and just plain funny comedy anywhere!

“Herkimer” has been a trademark performer with Presleys’ Country Jubilee in Branson for over 50 continuous years, performing on a nightly basis. His son, “Cecil,” Gary’s real-life son Eric, performs with him nightly and Ben Presley, Eric’s son and Gary’s grandson, performs with them almost every night ensuring the continuation of that “patented” Presley comedy and humor for generations to come.

As to “Herkimer” today, Gary Presley says, “Herkimer is still the same 15-year-old boy he was when he started; he just got a lot grayer and lost a lot more hair over the years.” To that this writer would simply add, “Yes sir, probably so, but he sure didn’t lose any of his ability to make people laugh and enjoy themselves!”

For more information or tickets for Presleys’ Country Jubilee please contact the Branson Tourism Center at 1-800-785-1550 or through its website www.BransonTourismCenter.Com.