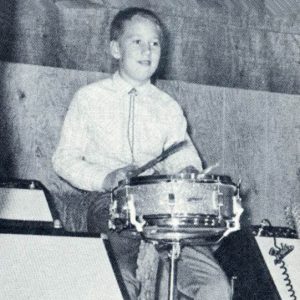 When you are watching Presleys’ Country Jubilee you probably won’t notice the drummer any more than any other instrumentalist on the stage. When you do notice him, the first thing you will see is his smile which, along with playing drums, is what Steve Presley has done on stage since he was ten years old.”

Well maybe in the beginning, the word “drums” would be a slight exaggeration. Oh, he was still the “drummer,” it’s just that the drummer was playing a single snare drum while sitting on a tree log with a piece of wood nailed on top for a drum stool. It was even a little more challenging than that.

In 1967, at age ten he left his friends in Springfield to move to an isolated spot on Highway 76, where his family was building Branson’s first live music theatre. At this point, Steve’s life was changed forever.

He went to school days, helped in the theatre, drummed in the show, and discovered the Ozarks outdoors and squirrels. In his free time, he hunted squirrels and other small game in “tick-heavy brush” near the theatre on the family’s property. He remembers walking across, the usually untraveled, Highway 76, to one of the few businesses in the area, “Jones Hardware Store” to buy BBs for his Daisy BB gun.

From the very first performance of the Presleys in their new theatre, Steve has been the drummer and so much more. Like his older brother and sisters, he did whatever was necessary to help the show succeed.

He sold tickets from the screened in back porch of the family home and a little “outhouse” looking ticket booth, in the front of the theatre; helped his dad and sister, Janice, clean the theatre after shows; and got his first job in marketing, walking through the campgrounds in the Branson area handing out Presleys’ brochures. Another “marketing” job was putting paper bumper stickers on the cars at intermission with masking tape. It took keen hearing, timing and quickness however. When he’d hear the bass guitar start playing for the second half of the show he’d run back into the theatre and start playing the drum again. 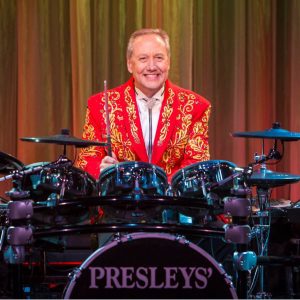 Over 50 years later, the drums have changed, but not his love of playing them or his smile.

Over the last 50 years a lot has changed. Jones Hardware is long gone and Highway 76, filled with theatres, attractions, businesses, and non-stop traffic, has become the famous “Branson Strip.” His single snare drum and log drum seat have been replaced by a high tech electronic drum set atop a platform at center stage. One thing has not changed however, his love for playing the drums, which he has been doing continuously in Presleys’ Country Jubilee for over 50 years.

In 1976, he made one of the best decisions of his life when he married his long-time sweetheart, Raeanne Miller. While both were attending Branson High School, Raeanne worked as an usher at “Presleys’ Theatre.” Together, in addition to raising a family, their involvement at the theatre and with the show, they have unstintingly given of themselves in serving the Branson community and its entertainment industry. Among other things, Steve was the volunteer chairman of the Advertising Committee for the Branson CVB for over 20 years, retiring from that role about four years ago. Raeanne served in many public service positions, most recently as the Mayor of Branson.

Oh, and that smile you see while he’s playing. It’s the genuine smile of a man reflecting his love for what he is doing and being able to do it with his family.