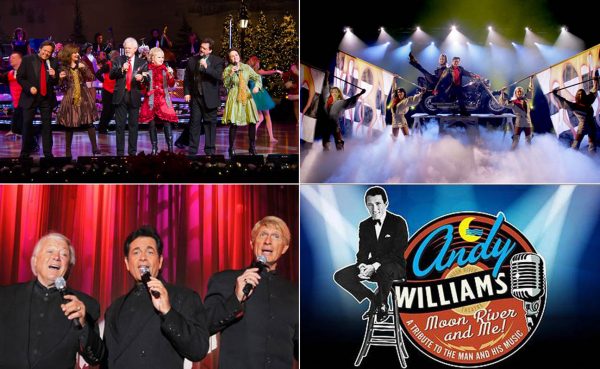 The Osmonds and Lennon Sister from the “Andy Williams Christmas Extravaganza,” “Illusionist Rick Thomas”, “The Lettermen” and “Moon River and Me”

When the Andy William’s Moon River Theatre was renamed the Andy Williams Performing Arts Center and Theatre, Jimmy Osmond pointed out that the name change was really calling it “what it was really meant to be by Andy’s design.” He said that although primarily used as a theatre, the building was designed as a multi-use performance space that could handle large and small-scale productions of various types of performing arts from Broadway productions, to concerts, dance, drama, music, and more.

He said, “From magic and comedy, to music from just about every genre, concerts and spectacular productions, we are offering Branson visitors a wide variety of entertainment that follows the Andy Williams tradition for variety and quality.” The Center’s variety of entertainment includes a mix of “house shows” and shorter “limited engagement” performances by touring national stars and acts that is one of the most extensive in Branson.

In the past two years the Center has featured limited engagement performances by stars such as Jennifer Nettles, LeAnn Rimes, Ray Stevens, Bill Engvall, and many others. America, Neil Sedaka, Paul Anka, Righteous Brothers, Tanya Tucker, and The Golden Boys will be performing limited engagements through the end of October.

The Center’s house shows, provide a wide variety of entertainment and include:

Andy Williams Christmas Extravaganza carries on the tradition of “Mr. Christmas,” the late and much-loved singer Andy Williams. The 5th Dimension and the famous sibling acts, The Lennons and The Osmonds, headline one of Branson’s hottest Christmas shows. In addition to these exceptional entertainers, you’ll be treated to the magic of Rick Thomas’ ‘Let It Snow,’ performances by the Lennon Granddaughters, the Andy Williams singers and dancers, and the incomparable Moon River Band. The production is spectacular with gorgeous costumes, festive sets, and amazing Christmas music! The 5th Dimension will headline the show from November 1 through November 18 with the Osmonds and Lennon Sisters headlining from November 20 through December 16.

The magic of Illusionist Rick Thomas will leave you wondering if it’s only an illusion…or truly magic. He uses his exceptional showmanship and incredible gracefulness, honed by years of ballroom dancing, to present a Branson show of stunning illusions and spectacular beauty! After seeing this show I wrote, “If you want to see one of the best magic shows to ever appear on a Branson stage, don’t miss the Illusionist Rick Thomas Show. In over 28 years of seeing magic shows in Branson, I have never been as amazed or entertained by a magic show as I was by this show.” It runs through October 27. Starting November 1, 2017, he will be performing in the Andy Williams Christmas Extravaganza.

The Lettermen continue to be one of music’s most romantic pop groups, making them an excellent show for couples. Their untarnished, all-American image, makes every performance perfect to share with the family. Although their biggest hits graced the airwaves back in the 60’s, that classic sound has endured in the decades since, thrilling their long-time fans and finding a new audience with a younger generation.

Moon River & Me pays tribute to the life, the music, and the wonderful man himself, Mr. Andy Williams! The sensational Jimmy Osmond stars in this dynamic production that features the Moon River Band, and is filled with award-winning music, video footage of Andy, and Jimmy’s own memories of the icon he knew as a friend and mentor; this is one powerful show!

Hallmark Presents Maxine’s Christmas Carol is a show that even the Grinch would envy. Charles Dickens could never have imagined the role of Scrooge inhabited by a sassy sourpuss like Maxine. The call-it-like-she-sees-it, lovable curmudgeon delivers the iconic story with song, dance, and a helping of merry and mirth, sprinkled with the best of her rude mood, and just a dash of attitude! Introduced to us by way of greeting card covers from Hallmark, the self-appointed Queen of Crabbiness, Maxine, has been a popular Hallmark character for over three decades and made her Branson debut in 2016.

For additional information on any of the shows at the Andy Williams Performing Arts Center and Theatre, or any of the many other exciting things there are to do in Branson, please feel free to contact the Branson Tourism Center and talk with one of their Branson-based Travel Planners. They’ll be delighted to assist you! BTC can be reached by calling 1-800-785-1550 from 8:00 AM to 9:30 PM seven days a week, or through its website www.BransonTourismCenter.com.