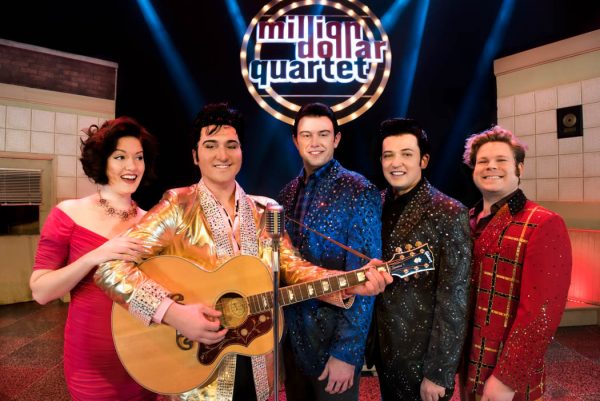 One of Branson’s most popular shows, the Million Dollar Quartet tells the story of one of the greatest jam sessions in rock ‘n’ roll history, an impromptu gathering of four young recording legends-to-be, Carl Perkins, Elvis Presley, Johnny Cash, and Jerry Lee Lewis. It took place 51 years ago this week, on December 4, 1956, in the Memphis storefront recording studio of Sun Records.

It went largely unnoticed until recordings of the event were discovered and released decades later. It is that jam session, those recordings, and the four rock ‘n’ roll legends involved, that became the inspiration for the Tony Award winning musical Million Dollar Quartet. The show shares the music, excitement, and drama of what happened that day, as these four legends performed together for their first and, last time.

Recently, John Countryman (JC), the tribute artist playing Jerry Lee Lewis in the Branson production of the Million Dollar Quartet, was kind enough to take time from his busy schedule to do an interview for a Branson – Up Close and Personal, a service of the Branson Tourism Center (BTC), one of Branson’s largest and most respected vacation planning services. It’s intended to provide an “up close and personal look” at a Branson star or personality and uses a “Question and Answer” format.

BTC: If you could meet and perform with anyone, living or dead, who would it be and why?
JC: I’d go with Leon Russell because I like the old ‘rock and rollers.’ I got to meet him shortly before died.

BTC: What do you like most about performing Jerry Lee Lewis in the Million Dollar Quartet?
JC: It’s fun! Everyone else in the session, Elvis Presley, Johnny Cash, and Ray Perkins were established performers, but Jerry Lee’s career, at that point, was just starting. He was only there because he was doing some session work for Ray Perkins, but he knew everything and wanted everyone to know that he did. It’s so much fun to play the role as I push everyone’s button.

BTC: Whether you’re in it or not, what’s your favorite part of the Million Dollar Quartet?
JC: The very end of the show when we do the mini concert with four songs back to back.

BTC: Why should someone coming to Branson plan to see the Million Dollar Quartet?
JC: It’s 90 nonstop minutes of fun and exciting live rock ‘n’ roll music, humor, great entertainment, and a history lesson about some of the coolest guys you’re ever going to hear about. I have been in a lot of productions and about 800 performances of the Million Dollar Quartet. The caliber of everyone in this cast is fantastic and it’s one of the best I have every performed with.

BTC: Where were you born?
JC: Newport News, Virginia

BTC: When did you first become interested in music?
JC: My mom was a music teacher, mom and dad sang in the choir in church, and there are pictures of me playing the piano when I was a baby, but I was 12 years old when I really decided to get serious and started practicing playing the way I do now.

BTC: Do you have any formal musical training?
JC: Just a couple of music lessons before I was 12 years old. Although my mom was a music teacher, the lessons were from another lady. We, myself and four brothers, were homeschooled by my mom so she thought it would be a good idea to get the music lessons from someone else.

BTC: When did you first become interested in Jerry Lee Lewis and why?
JC: When I first started playing the piano because, “He’s the man!” He was also “kind of dangerous,” played rock ‘n’ roll, and my mom suggested taking a look at his music. Once I played “Great Balls of Fire” I was hooked.”

BTC: When did you first perform publicly?
JC: At a home school convention talent show case in Winston Salem, North Carolina when I was about 15 or 16. I did a Jerry Lee Lewis medley that had Great Balls of Fire and Whole Lotta of Shakin’ Goin’ On‘ in it.

BTC: When did you first start performing professionally?
JC: In 2009 when I played with the Dirty Names Band. I played with them for about a year and a half. I left for many different reasons and took a job in a bank.

BTC: How did you end up in the Million Dollar Quartet?
JC: Shortly after starting with the bank, I got a call to audition for the Tony Award® winning hit Broadway show and the rest is history. In 2013, I went on the National Tour with the show and have been performing in it ever since.

BTC: Whether sung in the Million Dollar Quartet show or not, what is your favorite Jerry Lee Lewis song?
JC: The obvious answer would be songs like Great Balls of Fire and A Whole Lotat of Shakin’ Goin’ On, but I like some of his deeper cuts. His version of the Hank Williams song, Jambalaya from ‘Live at the International Hotel’ is one of my favorites.

BTC: Jerry Lee Lewis or not, what’s your favorite song?
JC: I really like the song Freight Train Boogie by Doc Watson.

BTC: If you could influence someone to remember one thing about Jerry Lee Lewis or his music, what would it be?
JC: The power’s in the left hand. Boogie-woogie involves a repeating bass pattern from the left and throughout. It’s that pattern that’s the music’s soul.

BTC: Prior to coming to Branson you were performing in Chicago. How did you end up in Branson?
JC: I was performing in the Chicago production of Million Dollar Quartet the first time I had a chance to do the show in Branson. I turned it down to stay in Chicago, but it closed a few months later and I had been performing the role in regional productions of the show when the Branson opportunity opened up. I was exhilarated when I got the chance to play the role in Branson and it’s been a great experience so far.

BTC: When was your first time in Branson?
JC: In the spring of this year. I had never been to Branson before and arrived on Friday just before we started rehearsals on Monday.

BTC: What was your first impression of Branson?
JC: It’s so beautiful and the people so friendly.

BTC: What do you like the most about Branson?
JC: I just love to play music, so I just love it that “you can’t throw a rock’” without hitting a musician.”.

BTC: What’s your favorite thing to do in Branson when you are not performing?
JC: Play music.