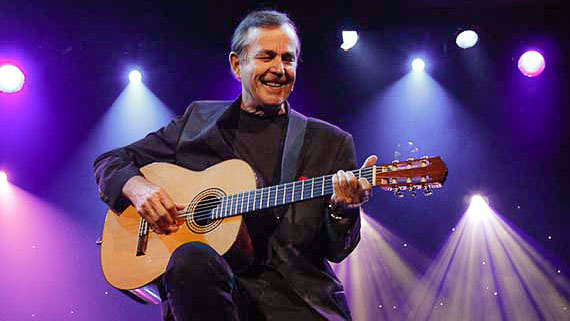 Among his many talents, Jim Stafford is considered a “guitar virtuoso.”

Jim Stafford has been billed as the “consummate entertainer,” and for good reason. He’s been doing it all since the 1970s, singing; song writing; playing a variety of instruments, all self-taught, including the guitar, fiddle, banjo, and piano; and comedy. And doing it well!

He hit the entertainment scene on the heels of a number of hits including, among others, “Swamp Witch,” “My Girl Bill,” “Wildwood Weed,” and his most popular hit, “Spiders & Snakes,” which rose to “No. 3 on the Billboard Hot 100.” He came to Branson and started the Jim Stafford show in 1990. This year, the show is celebrating its 28th year of entertaining Branson audiences. With decades of material to draw from, his unique combination of talents, and ability to relate to his audience, it’s a celebration not to be missed!

Stafford says, ““I’ve got new vocals, new stories and new instrumentals I’m working on. There is one new instrumental piece I’ve been working on for the past 16 months, and the reason why is because it’s hard.”

He also points out that as he has added new elements to his show over the years that some really “good bits fall by the wayside.” For the celebration of his 28th year in Branson, Stafford says that in addition to the new material, he’s decided to bring back some of his favorites from the past that he hasn’t done in many years.

One person who saw the show recently summed thing up pretty well. They called him a “comedic genius” in terms of his style and timing, suggesting that his style is reminiscent  of the comedy styles of Tim Conway, Phyllis Diller, Rodney Dangerfield and Elmer Fudd. They went on to say that “Jim Stafford is the real deal. An extraordinary entertainer.”

Stafford points out that in addition to his show, that the Jim Stafford Theatre is home to three more great shows offering a variety of live entertainment choices including:

Heartland Country a brand new classical country music show. It brings two of Branson’s long time favorites, Splinter Middleton and Casey Ellison, back to the stage along with Kailey Adams and Logan Allen and a great live band.

Parrottville, a tribute show covering the 40 years of all the great hits of the amazing Jimmy Buffet. It’s all presented by singers and a band with the talent to “make the magic happen,” amidst a show full of family fun, entertainment, and surprises.

The Magic and Comedy of Taylor Reed will keep you on the edge of your seat and wondering, “How did he do that?” This master of comedy and illusion has almost 40 years of experience entertaining audiences with his world class magic. Enhanced by fun story lines, wonderful sets, colorful costumes, and music, this high energy magical show will be enjoyed by the whole family.

For more information, tickets or reservations on any of these shows please feel free to contact the Branson Tourism Center, one of Branson’s largest and most respected vacation planning services and sellers of almost 5 million Branson show and attraction tickets by calling 1-800-785-1550 or through their website www.BransonTourismCenter.com.