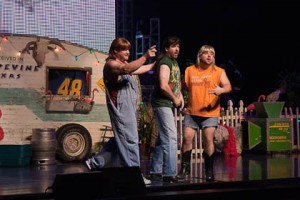 What a funny musical journey it is from this in Paris, Texas...

In one of the funniest and most relaxed interviews he has ever had the pleasure of participating in, Matthew Lord, one of the 3 Red Neck Tenors set him straight on a couple of things. There are actually four and not all of them are tenors. He plays “Billy Joe” in the show along with “Billy Bob” and “Billy Billee,” who was named after his ma’s pa “Billy Floyd” and his pa’s pa “Billee Duane” from which they came up with the “imaginatory” name of “Billy Billee.”

Lord said that in spite of the name of the show and its humorous content, “There’s not a red neck joke in our show” explaining that the show is actually about the humorous and musical journey of “3 Red Necks” from a trailer park to the opera in New York City and they wouldn’t be making “red neck” jokes about themselves. Actually, having seen the shorter version of the 3 Red Neck Tenors that appeared in Branson last year, this writer can testify that this show doesn’t need “pure red neck jokes” to have you rolling in laughter. Click here for his review of that show.

Lord points out that the show artfully incorporates a blend of unique humor and a variety of music including country, pop and classical into a two hour comedy and musical entertainment experience that entertains audiences of all ages. When asked if people have expressed a desire for one type of music more than another he said that happens. Some want more pop or country etc, but the “most popular number we do in the show, bar none, is ‘Nessun dorma’ from the opera ‘Turandot’ by Puccini and made extremely popular by Pavarotti.” Having heard the number last year in their show this writer can readily understand the truth in that statement. 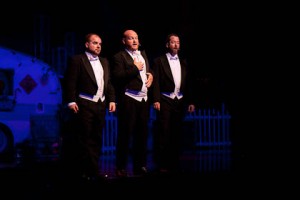 He said that audiences really appreciate the patriotic medley at the end of the show. Lord said it was not put in the show just for Branson, but was designed into the show six years ago when it was originally written, in part in honor of his dad who was a Veteran of World War II and Korea. As is the case with the whole show, it is performed in Branson exactly the same way as it has been performed since the beginning including their performances in Las Vegas because it was conceived and written for the whole family to enjoy and required no cleaning up or modifying for Branson audiences.

Lord said they are looking forward to being able to present their full two hour show for a full season in Branson at the beautiful Mansion Theatre. “The addition of the ‘3 Redneck Tenors’ to the exciting lineup of live shows in Branson adds another unique quality entertainment experience for Branson visitors to experience,” said Tammy Johnson, the Director of Operations for the Branson Tourism Center who also points out that they are scheduled to perform in Branson from April 22 through December 10.

For additional information or tickets for the 3 Red Neck Tenors or any of Branson’s other shows and attractions or for lodging arrangements please contact the Branson Tourism Center (BTC), one of Branson’s largest and most respected vacation planning services by either calling their toll free number 1-800-785-1550 or through their website www.BransonTourismCenter.com.