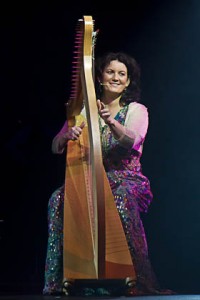 BRANSON, Mo. All eyes are smiling not just Irish eyes at Silver Dollar City‘s “When Irish Eyes Are Smiling” show being presented as part of the nation’s biggest international festival, World-Fest. As I sat in the show reviewing it for the Branson Tourism Center (BTC), one of Branson’s largest and most respected vacation planning services, I was struck by the unique beauty of the music and its manner of presentation.

Anyone who appreciates Irish music or wants a special and unique musical experience will simply love this show. It is a straight forward, simple, and elegant presentation of Irish music well played and sung by a great harpist, a wonderfully talented tenor vocalist and a great live band.

From her very first note on the Irish Harp or “Clairseach,” the official National Emblem of Ireland, it is very clear why Dearbhail Finnegan is considered Ireland’s Premier Harpist. It is one of those unique and beautiful things that, but for World-Fest most people would never experience and, the sad thing is, would never know what they had missed. Although she plays a number of songs, my personal favorites were her lilting presentation of “Inisheer,” about the small island of Inisheer, located in Galaway Bay, Ireland and her rendition of “How Are Things in Glocca Morra” from the musical “Finian’s Rainbow. 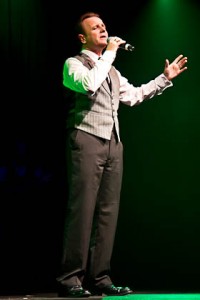 Michael Londra during his performance of "Danny Boy."

From his opening number, the modern Irish folk song called, “Wild Mountain Thyme” or “Will You Go Lassie, Go” to his closing number, a touching presentation of “Danny Boy,” the tenor voice of Ireland’s Premier Tenor, Michael Londra is a joy to hear. The unique way that both Dearbhail and Michael interact with the audience simply enhances the entertainment experience and by the time they joined together with the audience for the finale, “When Irish Eyes Are Smiling,” this writer had a smile not only in his eyes, but in his heart.

Tammy Johnson, the Director of Operations for the Branson Tourism Center said that “When Irish Eyes Are Smiling” is but one of the special shows and activities being presented for World-Fest. Other shows and acts include the “Russian Academic Band;” “Diego Martin Footprints Folk Performers” from Trinidad and Tobago with steel drums, stilt dancing and fire limbo; “Ecuador Manta;” “Canadian Powerhouse,” world-championship fiddlers and step-dancers and the “Mayorov Russian State Circus” featuring the “German Wheel,” amazing acrobatic feats, barbell juggling, comedy and much more.

She points out that all the World-Fest activities and shows are in addition to everything else Silver Dollar City offers on a daily basis. The 1880’s international award winning theme park features 30 rides and attractions encompassing everything from “Wildfire,” a world class multi-looping roller coaster that reaches speeds up to 66 miles per hour to a new $1 million “Half Dollar Holler” designed for kids through age 7 and dozens of demonstrating craftsmen. World-Fest will continue through May 8.