Last Updated – June 5, 4:00 p.m. -This is the last update we plan to post as all items are current. The latest update for each item is posted in bold type. 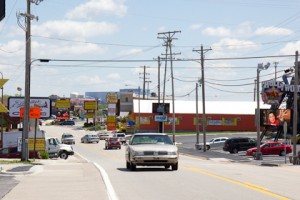 Looking east on Branson Strip at height of the high water discharge. It is high and dry and, media reports to the contrary, has never had a drop of water on it from water being discharged from Table Rock Dam.

[Special Tornado Note: We have received a number of calls from customers concerned that Branson was affected by the horrible tornado(s) that struck Joplin on Sunday, May 22. Branson is located approximately 100 miles from Joplin and was not impacted physically at all by the tornadoes and their accompanying storms. The impact of what has happened to our friends and neighbors in Joplin is  on our hearts and they are in our prayers.]

“Media stories and pictures create the erroneous impression that Branson is flooded,” said Tammy Johnson, the Director of Operations for the Branson Tourism Center, one of Branson’s largest and most respected vacation planning services. “This FAQ and Status Report provides facts establishing that “Branson” never was flooded, is open for business as usual and is providing its visitors with a unique blend of value priced family entertainment, fun, adventure and excitement that is only available in Branson, Missouri.”

1. Is Branson flooded? No. A few low-lying areas located along the shoreline of Lake Taneycomo and its tributaries get flooded when the U.S. Army Corps of Engineers is forced to release waters through the flood gates of Table Rock Dam. The most water ever discharged through the dam was 68,000 cfs during the Easter Rain event of 2011. As unfortunate as that is for those effected, no Branson Show, retail store or factory outlet, including Branson Landing, and the vast majority of Branson’s attractions and restaurants was closed because of high water.

UPDATE – June 5 – 4:00 p.m. All discharges of water through the flood gates terminated as about 4:00 p.m. June 3. The only water being discharged from Table Rock Dam is through its four generators.

UPDATE – May 28 – 3: p.m. The U.S Army Corps of Engineers has dropped the discharges from Table Rock Dam down to about 20,800 cfs. See Item 13 below for current information on actual lake levels and discharge rates.

UPDATE – May 26 – 10 a.m. The U.S Army Corps of Engineers is still  discharging 53,600 cfs,but it appears that Table Rock Lake crested at 11:00 p.m. on May 25 at 934.16. To help keep things in perspective, during the Easter Week rains 68,000 cfs was being discharged and Table Rock crested at 935.47. See Item 13 below for current information on actual lake levels and discharge rates. This FAQ will be updated on an item by item basis should and as the need arises.

UPDATE – May 24 – 10 a.m. The U.S Army Corps of Engineers began discharging 53,600 at 10 a.m.To keep things in perspective, during the Easter Week rains 68,000 cfs was being discharged. See Item 13 below for information on actual lake levels and discharge rates. This FAQ will be updated on an item by item basis should and as the need arises.

UPDATE – May 23 The U.S Army Corps of Engineers has announced that they will be discharging a total of 20,000 Cubic Feet of Water Per Second (cfs) through the Table Rock Lake Dam because of the rains over the weekend starting this morning and will adjust the discharge rates as appropriate.

2. Are all Branson shows open? Yes. All Branson’s shows are located well away from the few low lying areas impacted by the high waters. They were never effected by the water, are open and providing that great live entertainment experience for which Branson is famous. 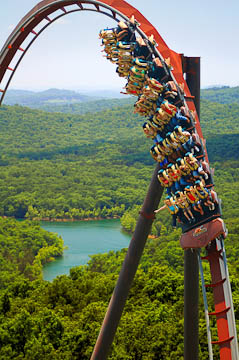 An icon of the fun, adventure and excitment that is Branson, Silver Dollar City's spectacular world class coaster, "Wildfire."

4. Are all of Branson’s attractions open? The vast majority of Branson’s attractions, including two of its most popular Silver Dollar City and the Titanic Museum are located well away from the few low lying areas impacted by the high waters, were never effected and are providing Branson visitors with the excitement, fun and adventure that is Branson. Generally, because of their location on the shoreline of Lake Taneycomo, on the lower level of Branson Landing, the cruises of the Branson Landing Lake Princess and Lake Queen will be suspended at water discharges greater than 46,000 cfs (See Item 13 below.)

UPDATE – May 30 – 2: p.m. The Branson Landing Lake Princess and Lake Queen Cruises went back in operation May 29.

7. Aren’t some of the restaurants at Branson Landing Closed? The high water level resulted in the temporary closing of White River Fish House Restaurant which actually floats on Lake Taneycomo. In addition, Shorty Smalls and Texas Land and Cattle Company, located on the east side of the promenade, as a precaution because the propane supply used for their cooking is located in the lower levels.

UPDATE – May 30 – 2: p.m Shorty Small’s is now reopened and it is anticipated that the White River Fish House will reopen Wednesday of Thursday of this week.

8. Are Branson’s Restaurants open? Yes. Of the 242 restaurants in Branson, as discussed in #7 above, only about three restaurants located on the east side of Branson Landing are effected by the high water. All of Branson’s other approximately 239 restaurants remained open. 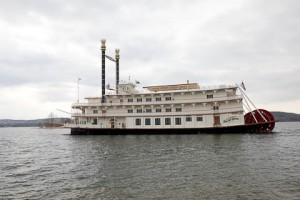 Another Branson icon, the Showboat Branson Belle, like Branson itself, is cruising into the 2011 season providing its visitors with the fun, excitment and entertainment Branson is famous for.

12. In terms of the flooding that did take place in those few low-lying areas what happened? The Branson area received about 15 inches of rainfall during Easter Weekend and the first part of Easter Week. This resulted in Table Rock Lake reaching a record high level of 935.47 feet and record releases of water through the floodgates of the Table Rock Lake Dam of 68,000 cubic feet per second (cfs) into Lake Taneycomo. In the immediate Branson area, the record rain and releases of water into Lake Taneycomo caused isolated local flooding and damage in some of the low-lying areas and damage to a few of the homes, condos and docks located right on the banks of the lake and some of its tributaries because of the water level, current and soil erosion

UPDATE – May 24 – 9:00 p.m.. Lake levels that were abnormally high because of the Easter Week rains started to rise again with the rains since May 20 resulting in the Corps having to again discharge water through the Table Rock Lake Dam flood gates. It started at about 20,000 cfs and is now at about 53,600 cfs. See item 13 below for latest changes.

13. What is the comparative status of the lake levels and water being discharged through the Table Rock Dam?

* Levels are all “feet above sea level.”
** cfs- Cubic Feet Per Second
*** Water being released from the Dam is a combination of generators and flood gates. Under normal operating conditions up to 14,000 cfs is discharged through the generators alone.
**** The fluctuations on Lake Taneycomo in terms of elevation and cfs are being controlled by the dams four generators and are within the normal daily parameters typically encountered on the lake.

14. If I was considering coming to Branson for a vacation this year should I change my plans because of the high water? Absolutely not. There was not one iota of effect on the shows, attractions, shopping, lodging, restaurants and the many other activities that the vast majority of Branson’s visitors come to Branson to enjoy with their families. Branson has all the fun, activities and excitement your family deserves to have on a vacation and with its everyday value pricing and other discounts is extremely affordable. Why not plan to spend your vacation in Branson and help your family create memories that will last a lifetime?

15. Was the Branson City Campground impacted? Yes. .It is located right on the shoreline of Lake Taneycomo at lake level. Information received from the City of Branson is that the campground is temporaily closed. Call 417-334-2915 for additional information. It had just reopened on May 6 from the Easter Week high water. Click here for details.

UPDATE – May 28, 2:00 p.m. Although the water levels of Lake Taneycomo have dropped back to within their normal levels today, at 9:00 a.m. this morning personnel from Scotty’s Trout Dock were in boats going over the top of camp sites to get to where some of their boats had been tied for safe keeping during the high water. The camp ground will reopen as soon as city personnel can remove debris, make appropriate repairs and remove the silt etc. Based on past experience it will reopen in sections with those farthest from the lake shore opening first and the process will take from a couple of days  up to a week. For more specific informaiton please call the camp ground directly at 417-334-2915 .

UPDATE – June 5 -4:00 p.m. – Latest information from Taneycomo Lakefront Resort & RV Park indicates that they are planning to reopen by July 1. Please call them at 417-334-7375 for additional information.

18. How is the trout fishing on Lake Taneycomo and is it safe to fish? It is excellent and it is safe to fish.

UPDATE – June 5 -4:00 p.m. The fluctuations on Lake Taneycomo in terms of elevation and cfs are being controlled by the dams four generators and are within the normal daily parameters typically encountered on the lake. (See #13 above.)

UPDATE – May 28, 2:00 p.m. With discharge levels back down to to 20,800 cfs, with the exercise of normal and prudent boating and safety practices, safety shouldn’t be an issue. The fishing should be excellent and this writer observed people fishing from the banks near the south end of  the Bass Proshop parking lot of  Branson Landing and they were catching trout so things are looking up.

UPDATE – May 24 With discharge rates at 53,600 cfs, the safety risks from current and current driven debris increases significant.

19. Will this FAQ Status Report Be updated? Yes on an as need basis. When it is, the date of the latest update will be placed at the top of the page under “Update Status” along with the Number of the item impacted by the update. For additional information or tickets for any of Branson’s shows and attractions or for lodging arrangements please contact the Branson Tourism Center (BTC) by either calling their toll free number 1-800-785-1550 or through their website www.BransonTourismCenter.com. For information specifically relating to lake levels, water discharges and their potential impact please feel free to contact Gary Groman at 417-294-0404. June 5 – 4  p.m. This is the final update. The information is as current as we can get it.