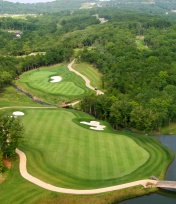 The Payne Stewart Golf Course is but one of Branson's many golfing opportunities.

When most people think of Branson, Missouri in conjunction with Shoji Tabuchi, Marty Haggard and Buck Trent they are thinking Branson shows, music and being entertained, but the August 12 edition of “GOLFWEEK” magazine presents them, and Branson, from a different perspective. In an article entitled, “A Lark in the Ozarks” Martin Kaufmann describes not only his golfing experiences with Tabuchi, Haggard and Trent on some of Branson’s fine golf courses, but does an excellent job of tying in what else Branson has to offer, not only in terms of its shows and entertainment, but in terms of lifestyle and a bit of history.

“What a wonderful way to share not only the great golfing that is available in the Branson area, but the total Branson experience,” said Tammy Johnson, the Director of Operations for the Branson Tourism Center. The article shares Kauffmann’s personal golfing experience with some of Branson’s premier entertainers at some of Branson’s best golf courses, personal insights on them and presents an interesting, very entertaining and insightful overview of Branson even to the point of saying, “Beyond Branson’s music, golf and other activities, what you’ll find here is a full-throated, unapologetic acclamation of the best of America: enterprise, initiative, unabashed love of country.”

Kaufman points out that Branson is home to “three Missouri’s top four public-access courses in the “GOLFWEEK’s Best rankings,” Branson Creek, Payne Stewart and Murder Rock.The article describes playing the newest, the Payne Stewart Golf Club, located in Branson Hills near the north side of Branson, with Marty Haggard. As he discusses playing the 210 yard par 3 second hole and the challenges it presented he shares Haggard’s reaction as they played the hole when he said, “Whoever designed this must have been angry the first few holes.”

He played another of Branson’s finest golf courses, Branson Creek, with Ross Summers, CEO of the Branson Convention and Visitors Bureau, Shoji Tabuchi and Gene Litner. Kauffmann said, that the “Tom Fazio design, with its long views of the Ozarks, helped put Branson on the golf map when it opened in 1999.” In describing one hole they played, the par 5 18th hole, he compared it to Pebble Beach’s closing hole except that instead of the Pacific Ocean as the hazard there is a “sea of trees.” In pointing out Shoji’s evident love of golf Kaufmann said that he jokes about his hopes that his daughter Christina, who sings and dances in his show and has “a budding career in Nashville, ‘makes it big real quick so I can play golf every day.'”

While in Branson, Kauffman also played the LedgeStone Golf Club saying, among other things, its “back nine – with its elevated tees, doglegs and risk-reward options – might be the most thrilling stretch of holes in town and the centrally located Thousand Hills Golf Course. He also mentioned Buck Trent and The Pointe Royale golf course, which Trent finds time to play most afternoons. In discussing Trent he pointed out that Trent settled in Branson about 20 years ago because he liked the people, saying, “They’re my kind of people.” Somehow, as one reads Kauffmann’s article about golf and Branson, it’s not too hard to believe he knows and appreciates exactly what Trent meant.