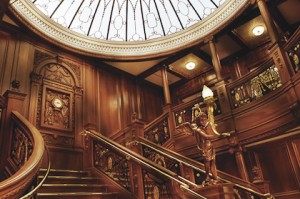 The "Royal Wedding" will be held on the spectacular "Grand Staircase."*

BRANSON, Mo. April 15 of 2012 will be the 100th anniversary of the sinking of the “unsinkable” RMS Titanic in the north Atlantic Ocean after hitting an iceberg late in the evening on April 14. Although the Titanic Museum Attractions “pay respect to and honor” the “2,208 passengers and crew members” who perished “the museums are honoring the 100 Year Anniversary of Titanic’s maiden voyage” with a series of “special events, activities, and ceremonies” leading up to April 15, 2012. One of the special events is the “Titanic Museum Attractions’ Royal Wedding Contest” honoring the honeymooning couples who were on board the Titanic.

To most, prior to James Cameron’s 1997 multi-academy award winning movie “Titanic,” romance was not what came to mind when one thought of the “Titanic.” Cameron’s epic film of the disaster and the fictional love story between “Rose DeWitt Bukater,” played by Kate Winslet and “Jack Dawson,” played by Leonardo DiCaprio, certainly changed that perception, but perhaps more towards accuracy than not.

Aboard the Titanic, as she steamed toward her destiny on her fateful maiden voyage, were at least 12 honeymooning couples. The vast majority of those couples did not survive the disaster because of the “woman and children first” rule enforced by the ship’s crew. One of the fortunate couples to survive was Ethel Beane, a 17 year old bride and her husband Edward. More common, was the case of the Astors, where Madeline was separated from her husband, John Jacob Astor IV, at the lifeboats. She survived, he did not.

Couples wishing to enter the contest must complete an online form, available at www.TitanicAttraction.com, along with complete contest rules and timelines, and submit it along with a video “introducing themselves, telling about their relationship, and explaining why they should win the ‘Royal Wedding'” by November 28, 2011. Between then and December 6 the Titanic Museum Attraction will pick three finalists for each location.

Beginning December 6 the public will be able to view the videos of the finalists online and vote. The winner will be the video receiving the most votes and will announced on January 16, 2012. Beginning on January 30, 2012 the public will begin a series of separate online votes for the brides wedding gown, the wedding cake and “Royal Wedding flowers.” The date of the Titanic Museum Attraction’s Royal Wedding will be announced March 30.

“What a special wedding these winners will be receiving,” said Tammy Johnson, the Director of Operations for the Branson Tourism Center, “and what a great way to get the public involved in remembering and honoring what happened on the Titanic almost 100 years ago. It’s always a great time to experience a voyage aboard the Titanic Museum Attraction, but there is just something special about doing it during its 100th year anniversary.”

For additional information or tickets for the Titanic Museum Attraction or any of Branson’s other shows and attractions or for lodging arrangements please contact the Branson Tourism Center (BTC), one of Branson’s largest and most respected vacation planning services by either calling their toll free number 1-800-785-1550 or through their website www.BransonTourismCenter.com.