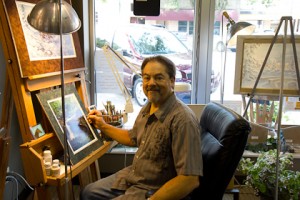 Tom Crain at his easel in his downtown Branson studio/gallery.

Although, in his illustrious 32 year career as an artist he had won the prestigious Ducks Unlimited Artist of the Year and was the first two time winner of the Missouri Waterfowl Stamp Design, until 2010he had not entered a State Duck Stamp Competition for about 20 years. In 2010 he decided he wanted to compete again so he entered competition in 10 states. Out of those ten states he placed in eight winning in three, Missouri, Ohio and Delaware.

If that’s not amazing enough, Crain’s first place winner in the 2011 Ohio Wetlands Habitat Stamp Design Competition, sponsored by the Ohio Department of Natural Resources (ODNR), Division of Wildlife, was of two mallards in flight. Prior to submitting that painting for the Ohio competition Crain had not painted a Mallard in over six year. “But,” he said” I just had a feeling that that species might do well in Ohio.” Although decades apart, Crain’s painting of a pair of “Redhead” ducks swimming at the Montrose Conservation Area won first place in the 2011 Missouri Duck Stamp and Print sponsored by Ducks Unlimited, making him a three time winner!

And if the genius of this quiet, unassuming and humble man stopped there that alone would be amazing, but it doesn’t. That’s just part of one year out of 32 years and one area out of the many in which he paints. Tom’s career highlights include, among others, work for the Franklin Mint, over 20 magazine covers for Cabela’s, Ozark Mountaineer, Fiocchi of America, Blue Book of Gun Values, Springfield Magazine and others as well as 22 plus limited edition prints and countless individual commissions.

His magnificent masterpiece of a Bald Eagle in flight, “Home of the Brave,” which toured Asia in 2000 and received a medal in China, is indicative of not only the detail of his paintings, but the spirit affection, love, and appreciation that this gentle, artistic and personable man has for what he is painting. His “eagles” are so lifelike, their coloring, detail and character so impeccable that one expects them to fly off the canvas.

Tom said that the medium he uses the most is acrylics and that he particularly enjoys painting wildlife, nostalgia, western and landscapes with “commissioned pieces” being his specialty. He said, “I am grateful for the talent that God has given me and I want to use that gift to bless people.”

Tom can be found, most Mondays through Saturdays, in his studio, “Crain Creations Gallery” located at 214 S. Main Street in historic downtown Branson. The next time you are in Branson plan to stop by the gallery and studio, which is as warm, comfortable and inviting as the artist himself, and meet this amazing artist and individual. For further information either visit the Crain Creations Gallery Website or call (417) 239-3710.

Photo courtesy of T. Morgan Crain with all rights reserved.