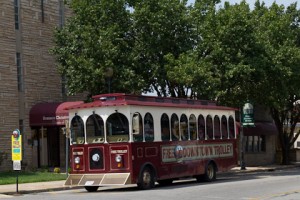 Free Downtown Trolley is both an attraction and a connection between Historic Downtown Branson and Branson Landing.

BRANSON, Mo. “What a blessing,” said Tammy Johnson, the Director of Operations for the Branson Tourism Center, “even in these trying economic times, historic downtown Branson is vibrant, alive and thriving.” She points out that the historic downtown district has it all, fun, shows, festivals, restaurants, shopping, attractions and history all in a unique, quaint, comfortable and laid back atmosphere that truly represents “small town” America at its best.

In terms of history, Branson, Missouri, the place that is today called “The live music capital of the world” got its start in historic downtown Branson. The “Baldknobbers Jamboree,” credited with being the “show that started it all,” held the city of Branson’s first commercial theatre performances in a small rented space inside a civic center building located in historic downtown Branson. Historic downtown Branson is the location the of grave of the man Branson is named after, Ruben S. Branson; it’s oldest free standing building Sullenger’s Saloon and the only buildings to survive the 1912 fire that virtually destroyed Branson’s downtown district within months after it was incorporated as a city on April 1, 1912.

If you’re thinking that makes Branson 100 years old in 2012 you’re right. And what a century it’s been, truly “A Century to Celebrate!” Branson’s Centennial Celebration, during the entire year of 2012, will do just that honoring “100 years of Heritage, Harmony & Hospitality.”

But, historic downtown Branson is much more than just history. With festivals, parades, shows, restaurants, attractions, and shopping galore, it’s a wonderful place to relax have fun and experience a special and unique part of Branson.

Its three primary festivals, “Plumb Nellie Days,” the “Fiddle Festival,” and “Autumn Daze,” help preserve Ozarks history and culture in terms of arts, crafts, music and just getting together and having fun. Historic downtown Branson has two major parades each year; “The Branson Veteran’s Day Parade,” which has been held at the 11th hour on the 11th day of the 11th month for the last 77 years and its “Adoration Day Parade,” a night parade which has been held for 64 years, honoring the true meaning of Christmas.

It offers shows such as Elvis and the Superstars, Breakfast with Mark Twain, Motown Downtown and others. It has a selection of restaurants located close together that includes four of Branson’s oldest the “Branson Café,” “Farm House,” “The Shack” and “Clockers,” all located within a block of each other and noted for their home-style cooking; “Rocky’s Italian Restaurant” and its three newest restaurants, Branson’s upscale “Level 2 Steakhouse,” located in the Hilton Branson Convention Center Hotel; the unique “Table 22,” “where the earth speaks,” and the “Downtown Dinner” located next to the historic Owen Theatre. 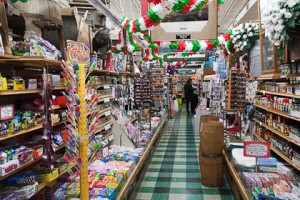 Just one of the many aisles of merchandise in the unique shopping experience that is Dicks 5 & 10.

Historic downtown Branson is a shopper’s dream in terms of the unique shopping opportunities it offers. From unique shops such as “Branson Bills Emporium” “Rosa’s Lost Treasure Chest,” “Lil’ Shoppe of Leather” “Hollywood Studio Store & More,” the “Burlington Annex” and dozens of others, the shopping experience in historic downtown Branson is unique and special. And, if that’s not enough there is a “Free Downtown Trolley” service” between the historic downtown district and Branson Landing, which opens up a whole new area of exciting shopping opportunities.

And that’s not counting ,“Dick’s 5 & 10,” celebrating its 50th anniversary during 2011, a one of a kind shopping experience harking back to the old time “5 & 10” stores. Dicks is so unique that it is also one of Branson’s most popular attractions. It’s wide selection of varied merchandise has led some to say, “If you can’t find it at Dick’s you don’t need it.” Historic downtown Branson also has other attractions such as horse and buggy ride,a  “Free Downtown Trolley” that runs through the historic downtown area to Branson Landing and along the Lake Taneycomo Lakefront every few minutes, the Branson Scenic Railway, and its newest attraction, the “Gone With the Wind Museum” commemorating the spectacular 1939 film that won 10 academy awards. In this writer’s opinion, the totality of the experience that historic downtown Branson offers is in itself an attraction.

When Branson became a city on April 1, 1912 downtown Branson was the “heart” of its business district, now almost 100 years later, in terms of history, heritage, harmony, and hospitality, it’s still a major part of the “heartbeat” that makes Branson the special place that it is. For additional information on historic downtown Branson and all it has to offer or any of Branson’s other shows and attractions or for lodging arrangements please contact the Branson Tourism Center (BTC), one of Branson’s largest and most respected vacation planning services by either calling their toll free number 1-800-785-1550 or through their website www.BransonTourismCenter.com.