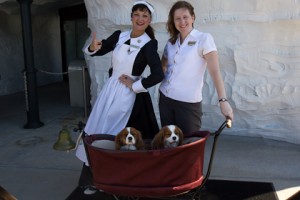 A well known national hotel has a daily “duck march” at 11 a.m. and 5 p.m. every day, with five ducks waddling along a red carpet to and from its lobby fountain. Well, in Branson, Missouri, when the whistle of the Titanic Museum Attraction blows at Noon each day, “Molly” and “Carter, two adorable and cuddly King Charles Spaniels, come around the bow of the great ship with their handler and one of the Titanic’s crew as they promenade down the winding walkway and past the waterfall to the iceberg by the attractions entrance where they “greet” the ships guests and pose for pictures.

When the Titanic’s First Class Maid, Jaynee said, “I love and adore Molly and Carter,” she was probably expressing the way a lot of the Titanic’s passengers feel about the two loveable “Titanic Mascots.” Kim Breit, one of their handlers who has been working with “the girls,” as she calls them, since their arrival at the ship in March of 2010 said that they “just love being around people and getting attention.”

Nowhere is that more evident than when they are in their carriage by the iceberg after the walk posing for pictures and interacting with the ships guests as they pet them. In one case, no pictures because of privacy reasons, a man in a wheel chair could not get close enough to pet the dogs. It was touching to observe the efforts that both Jaynee and Kim went through to bring Molly and Carter to him for pictures with his family and so he could pet them.

The look on his face as he petted them was priceless. To this writer, it illustrated the personality, heart and training of the Titanic’s crew toward ensuring that every guest has a great experience and the essence of what differentiates Branson from every other major tourist attraction in the world; the way we care about and for our guests.

Breit continued saying that Molly and Carter are sisters and will be three years old in November of this year. She points out that although they are sisters and both love attention and being around people that they have two distinct personalities. Carter is a big “snuggler” and likes to be held while Molly “is very independent.” Although “Carter” is a male name, she got her name from the “Carter” family who was traveling aboard the Titanic with a King Charles Spaniel at the time of its sinking. The Carters survived the tragic event, but sadly their King Charles Spaniel did not.

The life that Molly and Carter lead adds new meaning to “Being treated like a dog.” There are three handlers that rotate taking care of their every need during their working day as well as taking them home with them at night. When they are not greeting or interacting with guests while at the ship, daily from 9 a.m. to 5 p.m., they spend time relaxing in their “lavish” climate controlled “kennel” aboard the ship

For additional information or tickets for the Branson Titanic Museum Attraction or any of Branson’s other shows and attractions or for lodging arrangements please contact the Branson Tourism Center (BTC), one of Branson’s largest and most respected vacation planning services. BTC can be reached by either calling their toll free number 1-800-785-1550 or through their website www.BransonTourismCenter.com.