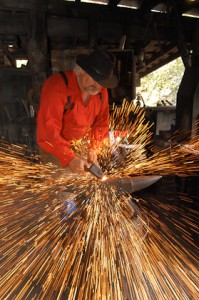 One of many demonstrating craftsmen at Silver Dollar City's "National Harvest Festival.

BRANSON, Mo.  One thing is evident in Branson, there is always something fun and exciting to do, but the month of October provides visitors with a unique opportunity for some special experiences. The first relates to the beauty of the Ozarks and the opportunity to see the Fall foliage and experience the natural wonder of the Ozarks. Although, because of hot dry weather, the foliage might not be as colorful as some years in the past, when coupled with Table Rock Lake and beautiful rolling Ozark vistas the Fall scenery in the Branson area is simply a unique spectacular experience.

Silver Dollar City, Branson’s most popular and oldest attraction, is a continuation of  that natural beauty. The 1880′s international award winning theme park, featuring 30 rides, shows, demonstrating craftsmen and much more has been integrated almost seamlessly into the beautiful Ozark hills of which is it a part.

In addition to all it offers on a daily basis, Silver Dollar City holds six world class festivals every year. The month of October presents the last opportunity to attend its “National Harvest Festival” with over 125 demonstrating craftsmen and artisans from all over the country; special shows such as the original award winning musical production of “Headin’ West,” the popular “Birds of Prey” and, new this year, the “Timberworks Lumberjack Show featuring “speed racing up 40 foot poles, cross-cut-sawing, ax throwing,” and much more. 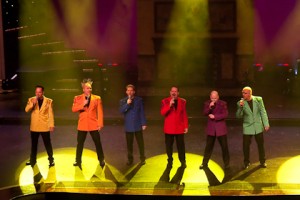 October is also a special month for Branson’s live shows because it is the last time for Branson visitors to see the 2011 regular season version of many Branson shows. Starting during the first week of November, with the start of Ozark Mountain Christmas, the vast majority of Branson Shows will transition over to their Christmas Shows making the month of October the last month to see the 2011 regular season version of their shows. This includes some of Branson’s most popular shows such as Presley’s Country Jubilee, SIX, Yakov Smirnoff, Hamner and Barber Variety, Shoji Tabuchi, and Pierce Arrow.

For still other regular season Branson shows, the month of October is the last chance to see them at all during the 2011 season because their seasons will end during the month of October. These include, but are not limited to, shows such as the Liverpool Legends, Smoke on the Mountain, Shepherd of the Hills Outdoor Play, Hooray for Hollywood, Righteous Brothers’ Bill Medley, Sons of the Pioneers, and the  Circle B Supper Show. October will be the last month for Branson Visitors to see the spectacular production of “NOAH, the Musical” at the Sight and Sound Theatre not only for 2011, but for at least a few years to come. It will be replaced by the equally spectacular “Joseph” starting in the 2012 season.

The Official Branson.Com Show Schedule indicates that October will also be an excellent month to see some great limited engagement performances. This includes Michael Bolton; Vicki Lawrence; Tim Conway with Friends; Don Williams with guest Little Jimmy Dickens; Aaron Tippin, Sammy Kershaw and Joe Diffie; Gatlin Brothers; Oak Ridge Boys and Marty Stuart. The end of October will also be the last chance to see some of Branson’s more extended limited engagement shows such as Andy William and Ann-Margret; Lee Greenwood and Louise Mandrell and Oh What A Night! A Musical Tribute to Frankie Valli & The Four Seasons.

For additional information or tickets for Silver Dollar City, any of the shows mentioned in this article or other Branson shows and attractions or for lodging arrangements please contact the Branson Tourism Center (BTC), one of Branson’s largest and most respected vacation planning services. BTC can be reached by either calling their toll free number 1-800-785-1550 or through their website www.BransonTourismCenter.com.