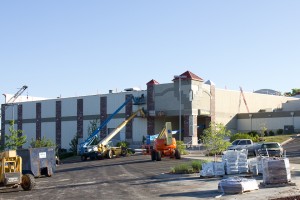 With roof work complete, workers are now working on the final phases of the restoriation of "Dick Clark's American Bandstand Theatre."

BRANSON, Mo – (April 6, 2012) “That’s great news, not only for the Dick Clark’s Bandstand Theatre, the Legends in Concert and Brett Family Show, but for Branson visitors too,” said Tammy Johnson, the Director of Operations for the Branson Tourism Center. Johnson’s comments were in response to an announcement by the theatre earlier this week that “with roof repairs now complete, the restoration” of the theatre from the impact of the February tornado can proceed to its final phase.

The “celebrated tribute artist production Legends in Concert will resume its 2012 season schedule on April 14 performing six days a week through the end of the year. The Bretts, who also perform at the theatre will open their 2012 season, as scheduled, on April 16.

Jeannie Horton, General Manager for Legends in Concert expressed her delight that the completion of the repairs is just about done and how excited she is that the “state of the art facility, that millions of our fans have always enjoyed during their visits to Branson,” will again be available for them to experience. “The repair team has been amazing, working rapidly and diligently,” she continued.

Horton said that the pleasure of working closely with the theater’s owner, Jim D. Morris and Jerry Carroll, his general manager to assure “that the theater will be better than ever, has certainly taken away much of the sting from the tornado’s fury.” Morris said he is “grateful for the dedication of those working on the repairs to reopen the theater so quickly.” He went on to say how thrilled he was that “our Highway 76 and Fall Creek complex, including the Ramada Hotel, Dick Clark’s American Bandstand Theater, featuring Legends in Concert, and all its activities, the Midtown said Cafe, and the brand new REEL CARS Automobile Museum under the theater, will all be open and working together in harmony in less than two weeks.”

The theatre is holding “a gala fundraising event, benefiting victims of the tornado, which will be held at the theater on April 20″ featuring an 8pm performance by Legends in Concert and special guest performers soon to be announced.” In announcing his support of the event Morris said, “We are pleased knowing that the fundraising will benefit the portion of the Branson community that was most adversely affected by the tornado.”

For additional information or tickets for the “Legends in Concert,” “The Bretts” or any of Branson’s other shows and attractions or for lodging arrangements please contact the Branson Tourism Center, one of Branson’s largest and most respected vacation planning services by either calling their toll free number 1-800-785-1550 or through their website www.BransonTourismCenter.com.