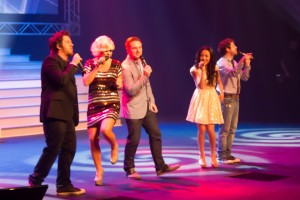 BRANSON, Mo., May 20, 2012 — At first blush, American Idols® In The Finalists Live!  provides those who have said, “Branson needs a show that will appeal to a younger demographic” with an answer to their prayer. What more could they ask for, five of the most talented vocalists in the nation, as proven by their performance on the hit show “American Idol® ,” not only singing some of today’s most popular songs, but original music they have written. However, after experiencing this show, I can say it is all of that and so much more.

First off, it is an entertainment experience in the best Branson tradition with the five Idol finalists giving as quality and energetic performance as has ever been seen on a Branson stage. In the days leading up to going to the show last night, I had talked with numerous people who had seen the show and not one of them had anything, but positive comments. More than one person had said, “When you see them perform you realize just how talented a person has to be to make the finals on ‘American Idol®.'”

We attended the show with friends who are giving a second opinion for my “reviews” and at intermission, Arlan A said, you guessed it, “You can see why they made it as far as they did on “American Idol®.” Folks, these people are not just good they are excellent, beautifully performing a broad variety of music with passion, energy and in a manner that holds your rapt attention throughout the show.

The show was performed in “Andy Williams Moon River Theatre” and the Finalists were accompanied by a live band and three backup vocalists who did an outstanding job. Three large screens on the back and sides of the stage provided an added element of color and interactivity as they showed graphics appropriate not only for the particular performer, but the number they were performing and, along with the outstanding lighting and sound, helped enhance the overall enjoyment of the show.

Pete Peterkin, a 2009 Finalist from “Americas Got Talent®,” was the first act of the evening. He warmed the audience up with his comedy and impressions. Although he did a number of impressions, the two that were my favorites were his Ray Charles and President Obama.

American Idols® In The Finalists Live!started off with all five performing together. It was a “musical introduction” that introduced the audience not only to them, but the personality, originality, fun, energy and quality of the individual performances that were to follow as they performed the “Black Eyed Peas” hit “I Gotta Feeling” and the “Pink”  hit “Get The Party Started.”

And “get the party started” is just what the top 11th finalist of last year’s American Idol® show, Thia Megia, did as she performed her set. The youngest Finalist in “American Idol” history at the time she appeared on the show, now 17, performed a set of four numbers including “Out Here On My Own” which she had performed on “American Idol.”

Next was Elliott Yamin who came in 3rd on “American Idol®” in 2006. All of his set were original songs that he wrote. His “Virginia,” about his home state of Virginia touched my heart. 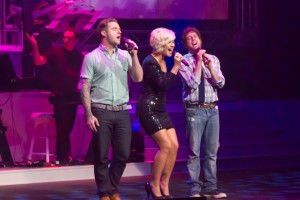 Kimberly Caldwell, who was the 7th place finalist on American Idol® in 2003 and who had performed as a member of the “Country Tonite” show in Branson prior to that, returned to Branson in grand style. Her powerful performance of her original song, “If You’re Gonna Fall” set the tenor for her set which led into intermission as Elliott Yamin and Blake Lewis joined her during the last half of her last song, the Lady Antebellum hit “Need You Now.”

The second half of the show started off with Beat Box performer Blake Lewis who was the American Idol® runner up in 2007. The highlights of his unique and entertaining set for me was his rendition of the Bon Jovi hit, “You Give Love A Bad Name” and the improvisation he does when he picks audience members, introduces them, as well as the audience to some of the equipment he uses in his act, and then incorporates it into a number.

Lee DeWyze the 2009 Winner of American Idol® performed a five number set of which four were original songs. The last song he performed was his version of the Leonard Cohen song “Hallelujah” which he performed on his way to winning “American Idol”.

All of the finalists came out and performed “Life In A Northern Town” and an encore “R-O-C-K In The USA.” What a wonderful and powerful end to a great nights entertainment. There was intentionally no individual comments about their individual “set” performances because each was so outstanding not only in terms of the manner of their presentation, vocal style and skill, but in the way they related to their audience.

This is a unique one of a kind show, performed by some of the finest vocalists one is likely to hear, not only in Branson, but anywhere. Combine that with their individual manner of performing, original songs, live band and the way they shared vignettes about themselves and their music and the result is a special entertainment experience that should not be missed.

It should be pointed out that this group of Finalists will be performing through June 16. A second group of Finalists, with an entirely new show,  Diana Degarmo, runner up in 2004 and current actress in the CBS program “The Young and the Restless®;” Scott Savol, who placed 5th in Season 4; Siobhan Magnus, who placed 6th in Season 9; Ace Young from Season 5 and Alexis Grace from Season 8 will perform from June 18 through July 21 and a third group Reuben Studdard , 2004 Winner of “American Idol®”; Bo Bice, Runner-Up to Winner Carrie Underwood in Season 4; Vonzell Solomon, who placed 3rd in Season 4; Katie Stevens from Season 9 and RJ Helton from Season 1 will perform from July 23 through August 18.

For additional information or tickets on the American Idols® Finalists Live! show or any of Branson’s other shows and attractions or for lodging arrangements please contact the Branson Tourism Center (BTC), one of Branson’s largest and most respected vacation planning services, by either calling their toll free number 1-800-785-1550 or through their website www.BransonTourismCenter.com.