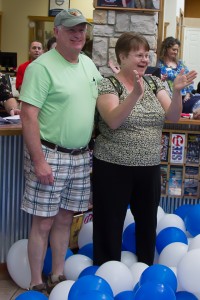 Peggy and Eddie Barthel, purchasers of BTC's 3 millionth ticket, just after hundreds of balloons fell and they discovered that they were the center of the celebration,

BRANSON, Mo., May 24, 2012 — When Eddie and Peggy Barthel of Florence, MS walked up to check in for their five night six day Branson vacation in the lobby of the Branson Tourism Center on the afternoon of May 24 they knew something special was going on when hundreds of blue and white balloons cascaded down from the ceiling around them and everyone in the lobby started applauding and celebrating. As they were greeted by Lianne Milton, the owner of BTC and the cast of one of the most popular shows in Branson and the first show on their itinerary, SIX, the Barthels discovered that they had purchased the 3 millionth Branson show and attraction ticket sold by the Branson Tourism Center (BTC).

BTC typically sells tickets, lodging and other Branson travel services and makes customers reservations well in advance of their actual arrival in Branson. “The Barthels became the lucky 3 millionth ticket customer when they placed their order on May 8, but it had been a closely guarded secret until their check in at BTC today,” said Brian Milton, the CFO of BTC.

When asked if they were surprised, Peggy said, “Absolutely…it was awesome” while Eddie said, “Most definitely.” It became even a bigger surprise for them when they found out that in celebration of their being the 3 millionth BTC ticket purchaser that, among other prizes, their entire six day, five night Branson vacation was being paid for by BTC as well as a two hour private charter on Main Street Lake Cruises’ “Branson Princess,” luxury yacht, for them and 100 of their friends and guests, on a future trip to Branson. While in Branson on this trip, the Barthels are staying at the LaQuinta Inn – Music City Centre and, among other things, their itinerary includes SIX, The Showboat Branson Belle, Branson Scenic Railway, and Silver Dollar City. 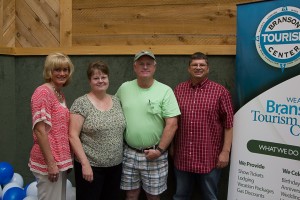 Eddie and Peggy Barthel, purchasers of BTC's 3 millionth ticket, center, with BTC owners Lianne and Larry Milton on either side,

Lianne Milton, the owners of BTC said, “The sale of our 3 millionth ticket means a lot to me personally because it represents the achievement of a milestone in our efforts to market the shows, attractions, lodging and other activities of our vendors and in sharing the Branson experience with over 940,000 people.” She attributes the success of BTC to the commitment and passion of its employees to sharing Branson and all that it has to offer with prospective visitors and in following the simple concept of , “If it’s important to you, it’s important to me” in making sure that every Branson Tourism Center customer has a great Branson experience and will want to return.

She continues by pointing out that the vast majority of the 3 million tickets that BTC has sold, as was the case with the Barthels, were marketed and sold to people, “out of market,” before they came to Branson; not through intercept marketing once they arrived in Branson. Based on figures furnished by the Branson Lakes Area CVB, the 3 million tickets sold by BTC represents a potential influx of revenues to its vendors, the city of Branson, and other Branson area businesses of over $233 million.

When asked how they liked dealing with the Branson Tourism Center, Peggy said, ” Everybody’s been so wonderful.” The follow-up question was “Would you have felt the same way even if you had not purchased the 3 millionth ticket? Peggy replied, “Absolutely. It started off real cool that day, I spoke with Lynn [Crissmon, one of BTC’s full service vacation planners.] He was so kind and very informative and helpful to me in getting this together.”

Prior to discovering the Branson Tourism Center on the internet, calling and speaking with Lynn she said, “I had spent most of that day spinning my wheels trying to decide where to go, what we were going to do and that kind of thing.” In summing up her Branson vacation planning experience with BTC she said, “One call that’s all, they just took care of everything. We’re just going to go up there and have fun.”

Little did she know just how much fun they would have!