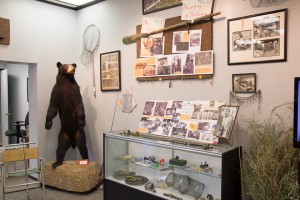 This display emphasizes that the outdoors has been a part of Branson tourism since its earliest days.

BRANSON, Mo., June 28, 2012 — “The ‘Branson Centennial Museum’ offers a unique glimpse into Branson’s past,” said Tammy Johnson, the Director of Operations for the Branson Tourism Center. The Museum, located on the corner of State Highway 76 and Business Route 65 in historic downtown Branson was established as part of the celebration of Branson’s Centennial, is free to the public and open from 10:00 AM to 4:00 PM Monday through Saturday and from 1:00 PM to 4:00 PM on Sunday.

During a visit to the Museum today, Mary Ann Sharp, Museum Manger, said that its exhibits are themed to include many different aspects of Branson’s History from “School Days,” “The White River/ Flooding,” “The Branson Fire,” “Conflict” and its current exhibit, “The Roots of Tourism” which will be on display until the latter part of July when “Fire and Flood” will replace it. The current exhibit has displays relating to early figures involved with the development of tourism in Branson such as Harold Bell Wright, Lizzie McDaniel, Jim Owen, the Baldknobbers, Presleys and others. It includes pictures and memorabilia and items from Branson’s early tourist activity involving shows, float trips, attractions, nightclubbing and fishing including the 1970s era costume of Steve Presley. 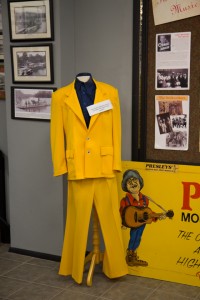 Although the vast majority of the displays will change with the next exhibit. Sharp said that a constant is the six minute historical CD, produced and provided courtesy of Branson Visitor TV that is continually “looping” and may be watched while sitting on a wooden pew from the “Old Stone Church” that predates the incorporation of Branson on April 1, 1912. I would estimate that a trip through the Museum would take an average of 20 minutes to an hour, including watching the CD, depending on how much time one spends reading documents and looking at pictures.

The Museum is extremely accessible, on the Highway 76 Main Street route to Branson Landing; is conveniently located on the ground floor of the multi story building, is air conditioned and has parking located just outside its main entrance. It may be contacted directly by calling.at 417-239-1912,

Branson Tourism Center’s Johnson points out that the Museum is only one of many interesting things to see while in historic downtown Branson including Dick’s 5 & 10, the grave of the man Branson is named after, Ruben S. Branson, the historic Owen Theatre, riding the free Downtown Trolley and much more. “And that’s just one small part of all that Branson has to offer,” she continued. For more information on the Museum, historic downtown Branson or any of Branson’s other shows and attractions or for lodging arrangements please feel free to contact the Branson Tourism Center through their toll free number 1-800-785-1550 to talk with one of their Branson located full service Vacation Planners.
,