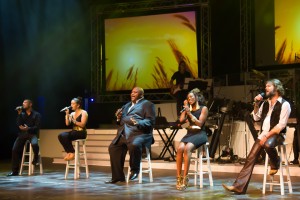 As I sat there watching the show, I could not help but appreciate how much the live band and background vocalists contributed to the overall enjoyment of the show. What makes it even more amazing is that they have had to prepare for, and work with, 15 different performers, concerts, and styles of music in such a short period of time. One can only imagine the effort that has gone into their contribution to the show. The band consists of Ricki Holmes, Music Director, Keyboards; Doug Clifford, Drums; Matt Skates, Bass; Adam Johnston, Guitar and Will Clark, Keyboards. The background vocalists are Shelia Davis, Jerry Pollock and Heather Peterson with the vocal coordination and arrangement done by Jana King Evans.

Pete Peterkin, who was a Season 4 finalist on “America’s Got Talent ®” opens the show demonstrating why he was referred to on the show as the “Rock and Roll President.” After doing his impression of President Obama he does some very impressive and entertaining impressions of a number of rock and roll and other stars including Chuck Berry, Little Richard, Ray Charles, Michael Jackson and others. Pete’s recollection of how he helped Johnny Mathis develop his singing style was not only funny, but a great impression of Mathis who will be doing his Christmas Show in Branson on November 16 and 17. Pete is personable, funny, relates well to the audience and is great at his impressions not only vocally, but instrumentally. It’s a wonderful way to open up the show and gets the audience primed and ready to “party” with the Finalists. 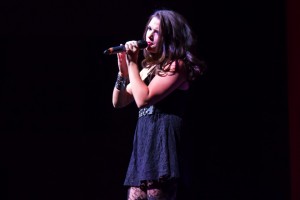 Before performing their individual concerts, all five finalists open the show and are each featured in two opening numbers, “I Gotta Feeling” and “Get The Party Started.” “The party” gets jump-started by 19 year old Katie Stevens performing a powerful and energetic rendition of Adele’s “Rollin in the Deep.” If the audience reaction is any indication, her performance of “Feeling Good,” from the musical “The Roar of the Greasepaint – The Smell of the Crowd” really did have them “feeling good” and her performance of “Who You Are” was as inspiring as it was beautifully sung and was this writers favorite from her set. This is one talented young lady who got “the party started in grand style.

Next up was RJ Helton who started his set off with an energetic performance of the Stevie Wonder hit “Superstition.” A highlight of his set was his performance of an original song from his first album, “Real Life,” entitled “Love Song” that he wrote to God in thanks for all that He has done for him. That, coupled with his performance of “My Devotion,” in the opinion of this writer, provided one of the singularly most inspirational and beautiful musical moments of the show.

Vonzell Solomon, has the energy of the “Energizer Bunny” on steroids and a voice to match. From her opening number Beyoncé’s “Crazy in Love,” through the Whitney Houston classic “I Have Nothing” to her beautiful and poignant performance of her original song, “Half a Heart,” written when her heart was broken, this amazing artist demonstrates a range of styles, stage presence and vocal quality that shows not only what it takes to be an American Idol®  Finalist, but place in the top three. What an outstanding way to take the show to its intermission. 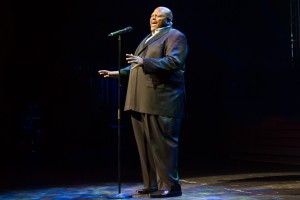 The second half of the show starts with Bo Bice, the runner up to Carrie Underwood in Season 4. His set includes a variety of styles from hard rock to the beautiful “Real Thing,” the inspirational “You Take Yourself with You” and “Sweet Home Alabama” with a guest “feature” from his fellow Alabamian Ruben Studdard. It is absolutely amazing the way Bo transitions from performing hard rock to the hauntingly beautiful performance of “You Take Yourself with You,” with its powerful and inspirational message, while taking his audience along on the wonderful journey.

The last performer was Ruben Studdard who demonstrated the “smoothly soothing vocal style” that not only won him the title of “American Idol®” in 2003, but demonstrates why Gladys Knight nicknamed him the “Velvet Teddy Bear.” Whether it his mama’s favorite song, “How Can You Mend a Broken Heart,” a Luther Vandross song, “Only for One Night,” or his first single the Westlife hit, “Flying Without Wings” Ruben’s performance is one of those rare entertainment gems that will be remembered long after the performance is over. His vocal talent and ability to have the audience vested in his performance, from the first note of his performance, was a joy to experience.

This excellent show closes with all five Finalists joining on stage to sing “Life in a Northern Town” and “R-O-C-K in the USA.” Don’t miss this opportunity to see these talented nationally recognized American Idol® Finalists perform in this exceptional and amazing show through August 18.

For additional information or tickets for the American Idol® Finalists In The Finalists Live show or any of Branson’s other shows and attractions or for lodging arrangements please contact the Branson Tourism Center, one of Branson’s largest and most respected vacation planning services, by calling their toll free number 1-800-785-1550 and talking with one of their Branson based Vacation Planners.