BRANSON, Mo., September 7, 2017 – “Compared to a lot of destination cities, navigating around Branson is a joy,” said Preston Garrison, the Director of Operations for the Branson Tourism Center. “The relatively compact size of its entertainment district, route numbering and color coded route system makes it very easy to efficiently find and get to Branson’s shows, attractions, shopping, lodging, or just about any other place you would want to go.” 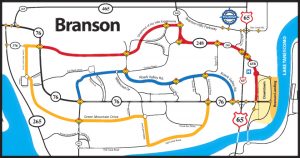 The vast majority of people coming into Branson do so via Highway 65, which, as is the case with the major odd numbered routes such as 165 and 265, in the Branson area, runs north and south. Even numbered routes such as 76, 248 and 376 run east and west. A quick look at the incorporated Branson Map, click to enlarge, verifies this fact and shows that the major north-south route through Branson is Highway 65 and Branson’s major east-west route is Route 76. East from that junction leads to Historic Downtown Branson, Lake Taneycomo, Branson Landing and the Branson Convention Center. West leads to the famous Branson Strip, located on Route 76, Branson’s major attractions such as the Titanic Museum Attraction, Tanger Mall, White Water and, farther west, Shepherd of the Hills and Silver Dollar City.

Branson’s system of alternate color coded routes also helps make it easy to find where you want to go and how to get there. There are three, Blue, Red, and Yellow. It can be generally said that they are overlaid on existing routes and roads and parallel Route 76, running east and west, with the Yellow Route doing so to the south of Highway 76 and the Blue and Red to the north. “A little time spent familiarizing oneself with these color coded routes can go a long way toward making travel around Branson more efficient, minimizing involvement with traffic congestion, and ‘timely arrivals,'” Johnson added.

The Yellow Route provides access to lodging and shows located on Fall Creek Road, Wildwood Drive, and Green Mountain Drive and an entry into shows such as Legends in Concert, Bretts, , Dixie Stampede, Andy Williams Moon River Theatre, Caravelle Theatre, Duttons, Branson’s Famous Baldknobbers, and others. Arterial streets provide access to theatres such as Clay Cooper, SIX, Mickey Gilley Grand Shanghai Theatre, it at the Hughes Brothers Theatre, and others along with Tanger Mall and White Water.

The northern most color coded route is the Red Route which intersects with Highway 65 at its “State Route 248” or “Shepherd of the Hills Expressway” exit. The eastern terminus of the Red Route is the junction of Route 76 and Business Highway 65 in Historic Downtown Branson with its western terminus being the junctions of Route 76, Shepherd of the Hills Expressway and Route 376 near IHOP.

At its eastern end, among other things, the Red Route provides access to Branson Landing, Main Street Marina, Main Street Lake Cruises, Historic Downtown Branson with Dicks 5 & 10 and much more, Lake Taneycomo, the city of Branson’s Lakeside RV Park and Scotty’s Trout Dock. As one travels west on the Red Route from its junction with Highway 65 on Route 248/Shepherd of the Hills Expressway they will pass by the Mansion Theatre, Sight & Sound Theatre with its spectacular productions, Pierce Arrow,  Hamner’s Unbelievable Variety Show, Shoji Tabuchi and the IMAX Complex with its great shopping, Elite III movie theatres, giant screen IMAX theatre, and the Little Opry Theatre.

The Blue Route starts from its eastern end at the intersection of Highway 76 and Roark Valley Road and runs west, paralleling Branson’s Strip to its north, until it ends at the intersection of Route 76 and Gretna Road right at Branson’s largest museum attraction, The Titanic Museum Attraction and kitty-corner from the Clay Cooper Theatre. It runs past the entrance to Ballparks of America, and by arterial roads, providing direct access to the Tanger Mall, Starlite Theatre, and other strip attractions.

For additional information on Branson’s color coded routes, getting around Branson or any of Branson’s shows, attractions and activities or for lodging arrangements please feel free contact the Branson Tourism Center (BTC) by calling their toll free number 1-800-573-5529.