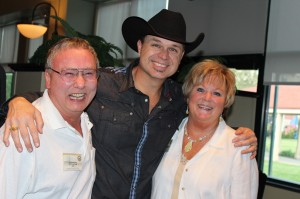 BRANSON, Mo., September 17, 2012 — What does the reunion of the USS Point Cruz in Branson, September 10 – 14 of 2012 have to do the with an emaciated near death two month old Korean Caucasian baby in a Korean orphanage in 1953? Actually, quite a bit according to Daniel Edward Keenan, who was that dying baby. “If not for the intervention of the Point Cruz, I would not be here today. They literally saved my life,” he said.

Keenan and the Point Cruz first “met” in September of 1953 when the carrier escort docked at Inchon Harbor, in South Korean. Its Chaplain, LTJG Edward O. Riley, while responding to a request for assistance from Sister Philomena de la Croix, the head of the French Catholic Orphanage caring for 400 babies, discovered an emaciated, near death, blue eyed, fair skinned, baby with blond hair, called “George,”  amid all the Korean babies. Knowing that the chances of survival for a half blood Caucasian baby were slim Riley went back to the ship and explained the situation to its “Skipper,” Captain John T. Hayward, who instructed him to go back to the orphanage and to not return to the ship without the baby.

Although it was against all military regulations, not a “one trip” to the orphanage situation and took the intervention of visiting Vice President Richard Nixon, the “Baby George” not only came to the ship, but the necessary Korean Pass Port and U.S. Visa paper work was completed for him to come to the United States within mere weeks. As unlikely as this seems in this day and age Baby George went aboard a U.S. Naval vessel and into the welcoming arms of its 1,000 plus man crew, who treated him as a “member” of the families they were so far away from and to whom they longed to return.

Not only was George piped aboard the ship like a visiting dignitary, he went into a “nursery ” the crew had prepared with a crib and playpen, handmade toys and an environment under which “George,” or “Baby-san” as he was sometimes called, flourished. The stories tell how sheets were cutup into diapers, the crew took turns changing his diapers, anxiously awaited the daily reports on his improving condition and gathered to see him whenever the PA Announcement was made that the baby “would be on the hanger deck” or was wheeled around the ship in a modified “bomb carrier” baby carriage. Imagine, a U.S. Navy ship with diapers hanging from the “yard arm.” So unique and touching was the story that it was made into a TV movie entitled, “A Thousand Men and a Baby,” which aired on CBS in 1997.

During the process, a doctor from the hospital ship USS Consolation, Lt. Hugh C. Keenan, who had treated him and examined him for his Visa indicated a desire to adopt him and obtained the enthusiastic long distance sight unseen agreement of his wife to do so. When the USS Point Cruz arrived in Japan, “Baby George” was “piped” off the ship and, with Chaplain Riley, boarded the USNS General Hugh J. Gaffey, a transport ship for transportation to the United States. When “George” disembarked from the ship in Seattle, Washington, December 12, 1953 in the arms of a Navy Nurse he was transferred directly into the waiting arms of his “mother” Genevieve Keenan.

“George,” was renamed Daniel Edward Keenan, “Daniel” being his dad’s father’s name and “Edward” after Chaplain Riley. It was over 40 years before “The Baby” and crew of the Point Cruz” met again. That was in a tearful celebration at the ships second reunion in 1993. Keenan has attended the vast majority of them since, including the one just completed in Branson, Missouri.

Julie Peters, Group Sales Manager with Branson Tourism Center’s Group Sales, worked closely with the USS Point Cruz in planning and holding their reunion., She said that in addition to participating in the fellowship and camaraderie of a military reunion, they also went to see Clay Cooper’s Country Music Express, SIX and The Yakov Smirnoff Show. Peters points out that while the group was at Clay Cooper’s Show he recognized them and asked Keenan to share the story with the audience. Peters said that  it’s always a special pleasure to work on Military Reunions and getting to hear the story behind “A Thousand Men and a Baby” was a special personal highlight.

What are the odds on that, Keenan and his wife Shirley would, on their own, elect to go to see the Branson production of the Price Is Right, Live Show, be selected at random as one of the contestants and win $2,500? Insignificant as compared to the odds involved with what happened to a near death baby named “George” more than half a century ago, but wonderful nevertheless.