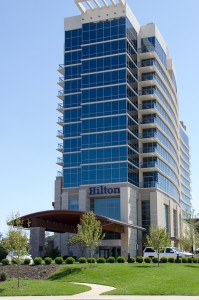 BRANSON, Mo., September 19, 2012 — The tornado that hit the iconic 12 story Branson Hilton Convention Center Hotel in the early morning hours of Feb. 29 took only seconds to do its devastating work. It has taken six and a half months of hard work, effort and planning and millions of dollars, but it is now reopened and welcoming guests to a virtually ‘new’ facility. “We’re pleased that we are able to open the first eight floors of the hotel a couple of weeks early and will have the entire hotel open by the end of the month,” said Bill Derbins, General Manager of the hotel.

Derbins estimates that the total damage to the hotel from the EF2 tornado was approximately $20 million dollars. In addition to other damage, shards of glass, driven by the twister’s winds, permeated every foot of carpeting, beds, furniture, furnishings, drapes and just about everything else they came in contact with requiring replacement. Along with other repairs, the hotel’s roof had to be replaced as well as 3,400 windows.

Derbins points out that not only were repairs made, but, as they were made, many improvements were added such as high energy efficient window replacements for each of the 3,400 windows blown out in the storm and new thermostats in each room that sense when the room is no longer occupied and returns it to a pre-set level to save energy. He is particularly pleased with the guest rooms in the hotel. He said that 220 of them are completely new and that all of them, as would be expected in a Hilton property, are extremely comfortable and beautifully decorated.

He said that the hotel’s restaurant, the “Level 2 Steak House,” noted for its fine dining, has reopened in its former location. It had been temporarily relocated to the Hilton Promenade Hotel at Branson Landing while the hotel was closed for repairs.

Derbins said, “It’s great to see our award winning staff back at work and serving our guests.” He says that in Group Nights alone, the hotel has 4,500 room nights booked in October and that doesn’t include “transient,” walk-in,guests. He summed it up by saying, “We’re glad to be back, doing what we do best, serving our guests and giving them the best lodging experience possible.”

“The ‘AAA Four Diamond Ranking’ of the Branson Hilton Convention Center Hotel, achieved by only ‘4.8 percent of the 31,000 lodgings approved by AAA,’ and which only one other Branson hotel has, indicates the quality and level of service guests can expect at the hotel,” said Tammy Johnson, the Director of Operations for the Branson Tourism Center. “We congratulate the staff and all those involved for their efforts in getting the hotel reopened as quickly as they did and are delighted that they are again open providing Branson visitors with the premium lodging experience “Hilton” is famous for.”