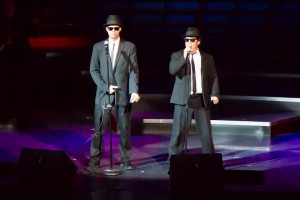 In addition to the other "stars" performing "The Blues Brothers," along with "Elvis" are in every Branson Legends in Concert show.

BRANSON, MO, June 5, 2013 – “On a daily basis, Branson’s theatres offer a variety of live musical entertainment shows that is unmatched by any tourist destination in terms of the number, variety and quality offered on a daily basis,” said Tammy Johnson, the Director of Operations for the Branson Tourism Center. “One of the many types of shows Branson offers is the ‘Tribute Show.’ In a general musical context that would, at a minimum, involve honoring a legendary singer, instrumentalist or music group by performing their hit music and, in many cases, the incorporation of their looks and mannerisms,” she continued.

While realizing that Branson has a number of excellent tribute shows, let’s take a look at five that represent the breadth and quality of the Branson shows that are tribute based and present and honor tmusical entertainment legends on a daily basis:

In terms of “tribute” shows, whether in Branson or anywhere else saying that the Legends in ConcertShow is just another tribute show is like saying the ‘Kentucky Derby’ is just another horse race. With shows in Branson, Las Vegas and many other venues Legends in Concert sets the bar for tribute shows with its celebrity impersonators going far beyond just a musical tribute and recreating legendary superstar performers and their performances. Each recreation is a wonderful artistic performance incorporating the voice, mannerisms and looks of the star being recreated. When the quality and variety of the legendary acts in each show is combined with a cast of dancers and backup singers, a great live band, marvelous production and choreography the result is no less than a “legendary” entertainment experience.

The Legends in Concert show pays tributes to many musical entertainment legends both living and deceased. It brings in new celebrity impersonators at least four times a year in addition to The Blues Brothers and Elvis who perform throughout the entire season. So far this year Jerry Lee Lewis, Diana Ross, and Brooks & Dunn have performed. Celine Dion, The Temptations, Johnny Cash are performing through September 3; Buddy Holly, Whitney Houston, Johnny Cash from September 5 through October 31 and Stevie Wonder, Cher and Alan Jackson through December 31.

Dancing Queen pays a musical tribute to the Swedish pop group, ABBA. Touring since 2009 in places such as Monaco, Las Vegas, Reno & Niagara, Dancing Queen is now proud to call Branson its home paying tribute to ABBA with “a sparkling show stopping musical extravaganza. This musical spectacular features singers and dancers performing ABBA favorites such as “Dancing Queen,” “Waterloo” and “The Winner Takes All” as well as other ABBA era 70’s classics like “YMCA” and “In The Navy;” an upbeat medley including “Respect” & “Mustang Sally” and a rip-roaring Motown section featuring, among others, “Dancing in the Streets,” “Ain’t No Mountain High Enough” and “Shout”.

The 2013 tribute performance of the Liverpool Legends titled “The Complete Beatles Experience!” is an all new full production Beatles extravaganza spanning the entire musical career of The Beatles including the “solo” years. The Liver Pool Legends is the only Beatles tribute band that was handpicked and received the tutelage and guidance of Louise Harrison, the sister of original Beatle George Harrison. Every detail from the Liverpool Legends music, mannerisms and performance including costumes, vintage instruments and special effects are as close to a performance of the original Beatles as one is ever likely to see. 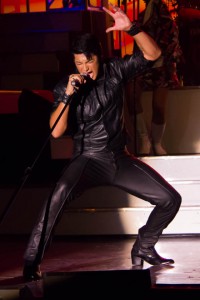 Joseph Hall performing his recreation of "Elvis" as only he can.

How good is Joseph Hall’s tribute to Elvis? When he appeared on “NBC’s America’s Got Talent,” Piers Morgan said, “Elvis is back in the building.” It’s a refrain that many of those who have seen his Branson show are echoing.

It makes no difference whether it’s the “black leather” era of “I’m All Shook Up” to the “white jump suit” era of “An American Trilogy” or anything in between; Halls Elvis recreation tribute is a one of a kind performance in terms of sound, mannerisms, looks and costuming. One person, who has been an avid Elvis fan since 1962 and personally saw ten live Elvis Concerts said, “He is the best that I have seen. It’s like watching Elvis.”

The Rankin Brothers Classic Music Revue is a musical tribute show to the music of the 50’s through the 90’s and the legendary stars who performed it. Its tribute is a unique combination of the musical and characterization  and “replication” of those who performed it. Although, if you closed your eyes and just listened to many of the songs being performed you would swear that you were hearing the original artists; the show is not a “recreation” show in the format of Legends of Concert.

It is more a “replication” of the classic songs “the way you remember hearing them.” There are many who had the opportunity to hear the performers and groups being honored during the show in “real-time” during the height of their careers who can attest to the fact that it is that and much more. In many of the performances during the show that sound is enhanced by the “appearance” of the performer themselves such as, among others, “Sonny and Cher,” “Elvis,” “Buddy Holly,” and many more which adds variety, excitement and, in some cases, a little comedy to the tribute.

For additional information or tickets on the tribute shows mentioned in this article or Branson’s other tribute shows please feel free to contact the Branson Tourism Center, one of Branson’s largest and most respected vacation planning services by calling 1-800-785-1550 or through its website, www.BransonTourismCenter.com.