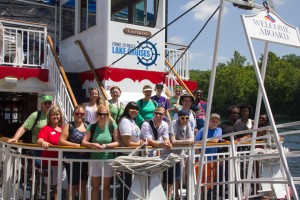 "Operation Liftoff "teens and caregivers on bow of "Lake Queen" as they boarded.

BRANSON, MO, June 28, 2013 — I have been on many cruises aboard Main Street Lake Cruises’ Lake Queen, but none was more special or personally significant than yesterday. I had the opportunity to cruise with 10 awesome courageous teenagers who are fighting Cancer and were in Branson on an “Operation Liftoff Teen Trip” with their seven care givers.

Randi McCormick, a Sales Manager with the Group Sales Division of Branson Tourism Center, said that she was contacted by John McLaughlin of Operation Liftoff through the BTC website, www.Branson Tourism Center.Com about setting up a Branson trip for the teenagers, each of whom is fighting Cancer. McCormick explained that from a logistical and processing perspective the planning of the group’s itinerary and Branson activities was routine and was designed to help the Group Leader, in whatever way possible, to plan and provide their group with a great Branson experience. From a personal perspective however, it was much different.

McCormick said that both of her parents are fighting Cancer. “The planning of this trip was very near and dear to my heart, but this group just kind of touched us all and brought us all together as we thought about what these kids are going through and fighting; we just wanted to do a little extra.” The result was a number of surprises for the kids from a brownie and ice cream party provided by Branson Landing, a pool side pizza party hosted by the Hilton Promenade Hotel as well as other surprises from Dixie Stampede, Branson Tourism Center and Main Street Lake Cruises.

John McLaughlin, the Group Leader, said that he has been involved with Operation Liftoff for over 20 years in different capacities. Currently he is a board member who heads up its “Teen Trip Program” which is the part of Operation Liftoff that provide trips for teenagers who are currently fighting Cancer and could not otherwise afford to make a trip like this on their own. McLaughlin pointed out that in addition to the fun, one of the primary benefits that a trip like this offers is a chance for the kids to get together with other kids who are in similar circumstances. 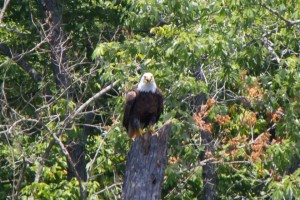 Bald Eagle just prior to launching into flight.

Just about every teen on the trip, under the watchful eye of Captain Brian Ayers, took advantage of the opportunity to sit in the Captain’s Chair and steer the Lake Queen on her return trip from Rockaway Beach. Although it was one of the hottest days of the year, as is normally the case, the cold waters of Lake Taneycomo mitigated the heat. In addition to the spectacular rock formations downstream from Branson, panoramic vistas and the beauty of Lake Taneycomo’s shore line, the group was treated to a show by a Bald Eagle who posed from its perch and preened itself prior to launching itself into flight from its lakeside perch.

The group had a full itinerary on their trip in addition to their cruise on the Main Street Lake Cruises’ Lake Queen including Dixie Stampede, Silver Dollar City and the Showboat Branson Belle. I had a short interview with three of the teens from the group, none of whom had been to Branson before, about the cruise and what they thought of Branson.

Miss NM* said that the cruise was “awesome,” extremely relaxing, that she had never seen an Eagle in the wild before and would definitely recommend the cruise to other teenagers, a sentiment echoed by Misters CJ* and RR.* RR said “you will never get bored in Branson” and all three spoke about the great time they had at Dixie Stampede the night before and of how eager they were to go to Silver Dollar City. Even with another day and a half in Branson ahead of them, all three expressed their eagerness to come back to Branson. RR said that he would live in Branson if he could.

Each year, groups of all sizes come to Branson for many reasons from reunions, meetings, competitions and conventions etc. because of all that it has to offer. How special is it that what Branson offers was able, even if only temporarily, to offer respite, fun and relief to these special teens from the daily challenges that their battle with Cancer presents?

* Initials used to protect the privacy of these teenagers.