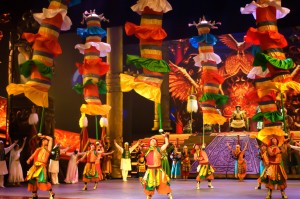 One of the many spectacular and colorful moments in the show..

BRANSON, Mo., August 2, 2013 – The story of Venetian “explorer” Marco Polo’s 20 plus years of living in China, his relationship with Kublia Kahn and first hand descriptions of the culture, history and heritage of China in the late 1200’s created a fascination with China when the “story” “The Travels of Marco Polo” was first published around 1300. On August 9 Branson audiences will have the opportunity to experience Marco Polo’s story and China as it is beautifully and spectacularly brought to life on stage in the show the “The Adventures of Marco Polo.”

Pamela Kay Critchfield, Director, Sales, Marketing and PR for the White House Theatre said that it “is one of the biggest shows that ‘China Heaven Creations International Performing Arts Co. Ltd.’ a major producer of entertainment productions in China since 1999, has ever produced. “It was especially created with American audiences in mind and to debut in Branson,” she continued.

Critchfield points out that the shows lavish sets and a 2,000 square foot floor to ceiling and side to side high resolution screen LED screen provide a spectacular, visual, and dynamic element to the show. When combined with an international cast of 66, over 100 beautiful costumes, “original orchestration, amazing dance, acrobatics and magic,” along with a story line combining history and love, the result is a show that will truly entertain all ages “from 2 to 92.” She said that Branson audiences will be treated to an entertainment spectacle the caliber of which is typically only available in New York or Las Vegas.

“We are just so excited that this epic production will be added the line-up of great shows that Branson has to offer,” said Tammy Johnson, the Director of Operations for the Branson Tourism Center. “Too we are honored that ‘China Heaven Creations International Performing Arts Co. Ltd.’ chose to have the world debut The Adventures of Marco Polo in Branson,” she added.

For additional information or tickets for The Adventures of Marco Polo please feel free to contact the Branson Tourism Center by calling 1-800-785-1550 or through its website www.BransonTourism Center.com
.