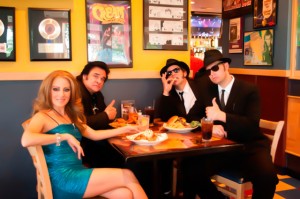 Some of the cast from the "Legends in Concert Show" "Celine Dion," Brigitte Valdez; "Johnny Cash, Paul Eve and "The Blues Brothers" Bucky Heard as "Jake Blues" and Justin Clark as "Elwood Blues" enjoying their meal at the Grill.

BRANSON, MO, August 6, 2013 —  Where can you eat fried pickles see a truly legendary show, hear Elvis sing, see a Celebrity Car Museum and experience a legendary show all at one place? All this and more is at the Dick Clark’s American Bandstand Theater Complex on the famed “Branson Strip.”

The Complex is “an integrated entertainment and hospitality destination” with a state of the art theatre featuring the Legends in Concert and the Bretts shows, a Celebrity Car Museum, an adjacent Ramada Inn and the recently reopened “Dick Clark’s American Bandstand Grill.” Among many others the Grill’s new menu includes classic signature items such as Philly Cheese Steak Sandwiches, Almond Crusted Chicken Fingers and Fried Pickles.

In talking about all that the Complex offers, Legends in Concert General Manager, Jeannie Horton said that the Grill is the perfect enhancement for the Complex. It enables their guests to park their car, enjoy a truly unique dining experience at the Grill, peruse the expanded museum quality memorabilia in the theater lobby, see the Celebrity Car Museum and top it off by seeing the award-winning Legends in Concert show without ever leaving the Complex.

The opening of the Grill was made possible because local Springfield/Branson businessman and philanthropist Jim D. Morris, who purchased the Complex in 2011, entered into an agreement with Dick Clark Productions for re-opening of the Dick Clark’s American Bandstand Grill at the Complex. In announcing the addition of the Grill Morris said that he was ” delighted to have the Dick Clark’s American Bandstand Grill re-open and pleased to see it restored to its original name, concept and design within the Bandstand Complex.”

For more information about Dick Clark’s American Bandstand Theater Complex; or tickets or information for the Legends in Concert  or Betts shows please contact the Branson Tourism Center by either calling 1-800-785-1550 or through their website, www.bransontourismcenter.com/.