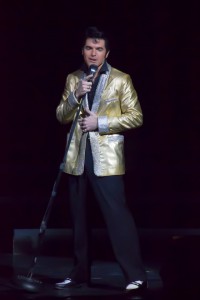 Dean Z performing his Elvis tribute during a recent performance of the Legends in Concert show.

BRANSON, Mo., August 18, 2013 — “At Legends in Concert we take great pride that our tribute artists are the best of the best,” said Jeannie Horton, General Manager, of the Branson Legends in Concert Theatre. “We have always known that Dean Z was one of the best Elvis Tribute Artists out there and we are just thrilled that now the whole world knows,” she continued.

Dean Z won his invitation to the Semi-Finals by winning the Preliminary held during the Rockin’ Elvis Fest” on March 17 at the Pala Casino, in Pala, CA. He and the 27 other semi-finalists competed for the ten spots in the Finals on August 14 with the Finals being held last night.

In a Branson Up Close and Personal Interview for the Branson Tourism Center in February of 2011, Dean Z’s answers to three questions just might indicate why he is enjoying the success he is:

BTC: How did you get started being an Elvis Presley Tribute Artist?

DZ: I started when I saw Elvis on television when I was three years old. I cleared off the coffee table, started dancing and the next thing I knew I was performing at my sister’s talent show singing ‘Jailhouse Rock.’

BTC: How long have you been performing as an Elvis Tribute Artist?

BTC: You are known for the effort you go through for authenticity

DZ: Elvis was pretty successful so ‘If it ain’t broke I don’t fix it.’ I want my tribute to be as close and accurate to the way Elvis looked and performed as possible. From shoes, to jackets, suits, and the other cloths I wear on stage, everything is custom made to help keep it just the way he did it.

“We too would add our congratulations Dean Z on his well-earned victory. Not only is it a tribute to him, but a testimony as to the caliber of the entertainment to be found every day performing in Branson in the Legends in Concert and other Branson shows,” said Tammy Johnson, the Director of Operations for the Branson Tourism Center.