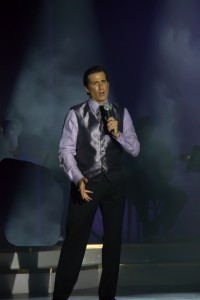 BRANSON, Mo., November 8, 2013 – This writer was reminded again last week why he has described George Dyer as “Branson’s tenor extraordinaire as he again experienced the wonder, power and beauty of his voice and his interaction with his audience during the George Dyer Show. His voice is one of the most magnificent tenor voices I have ever heard, but when it is combined with one of the finest bands in Branson, his “mini introductions” of each number, the marvelous vocal talents of his family and his personal charisma the result is a unique and memorable entertainment experience simply not available anywhere else, in Branson or otherwise.

When most people hear the term “tenor singer” they think of opera. This show is anything but opera. Like many of Branson’s resident family shows, the first half of his Christmas show is the best of his regular season show and is a virtual cornucopia of music genres, including music from Broadway, Gershwin, Sinatra, Darin and Disney, to mention a few, with the second half being devoted to Christmas and not an “opera” number in the show.

Before getting to George Dyer himself, it should be noted that he is surrounded with talent starting with his family, his wife, Clarisse; daughters Kendra and Kassidy and sons Mitchell and Garrett. The vocal talent of this family is simply amazing both as individuals and as they sing together. Kendra’s performance of “Embraceable You;” Kendra, Mitchell and Garrett’s performance of “White Christmas,” with an instrumental surprise and Clarisse singing “I Cried the Day I Took Down the Christmas Tree” all illustrate that point.

And then there is the band consisting of Norman Bergen, Pianist/Conductor; Bogie Bohinc, Lead Guitar; Rob Wilson, Drums; Marcus Willet, Bass Guitar and Rickey Helms on the Keyboards. They are phenomenal in terms of their experience, talent and instrumentality making an already special show even more so.

The magnificent rich tenor voice of George Dyer is just a joy to hear as he covers a variety of music as only he can. His singing would be enough, but when combined with his personality, interaction with the audience and the unique way he introduces each number the end result is a wonderful and unique musical entertainment experience without equal. Although subjective, from many, Dyers solo performance of “Bring Him Home” from “Les Miserables” and the “The Impossible Dream” from the “Man of La Mancha” were this writers favorites.

Adding to the enjoyment of the shows music is his “charisma,” ability to relate to his audience and the short entertaining introductions he gives to each number. J.P. from Mobile Alabama, a first time Branson visitor, who was at the show said “I love it and was very impressed.” When asked what he liked best about the show he replied, “His vocal range and the different types of music he sings. I love the way he intros each of the songs.”

During the Christmas portion of the show George and his daughter sing a duet that is a wonderful inspirational message of the true meaning of Christmas. It combines Kendra’s performance “Breath of Heaven” with George’s performance of “Mary Did You Know” into one of the most beautiful and touching Christmas performances that most will ever hear.

Right after his opening number, George shares his hope with the audience that after seeing his show, “They will be entertained and inspired.” That is a self-fulfilling prophecy for those who love a magnificent tenor voice singing music that is timeless in its ability to entertain and inspire. From beginning to end this is a special entertainment experience that should not be missed.

Please feel free to contact the contact Branson Tourism Center, one of Branson’s largest and most respected vacation planning services for additional information on the George Dyer Show or for information or tickets for any of Branson’s shows and attractions or for lodging arrangements by calling 1-800-785-1550 or through its website, www.BransonTourismCenter.com.