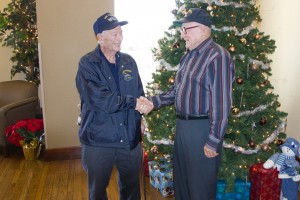 BRANSON, Mo., November 10, 2013 – Branson’s Veterans Week is a time for Veterans to relax, have fun, be honored and there might very well be hundreds of individuals being reunited with someone they haven’t seen in decades. It is highly unlikely however, that many such reunions will reunite two shipmates who served together for four years, have been separated for 61 years and are together this week as the result of a hat and a chance meeting at an auction.

When Eric Prey, a Vacation Planning Specialist for the Branson Tourism Center, first mentioned that one of his customers, Gene Gummersheimer, was coming to Branson with a small group of crewmembers that had served on the USS Taussig, he explained that among those crew members were two who had not seen each other in 61 years. Beyond the 61 years the story of how the reunion occurred defies all odds indicating that it was destiny’s plan for these old shipmates to meet again.

2nd Class Pipefitter Waynolin Wood and 3rd Class Engineman Darrell Mann served together aboard the USS Taussig DD 746, a destroyer with 20 Battle Stars, from 1948 until 1952 and two tours in Korean waters during the Korean War. In 1952 Wood left the Navy and Mann made the Navy his career serving for 20 years.

About three years ago, Gene Gummersheimer, who served aboard the Taussing ten years after Wood and Mann had left, was at an auction wearing a USS Taussig hat and a woman, Sandy Wood, came up and told him that her husband had also served on the Taussig. They exchanged contact information and Gummersheimer called Wood and sent him a roster with the contact information of the crew members that were still alive. Wood saw Mann’s name and the result, thanks to the efforts of Gummersheimer, was the reunion in Branson this week of Mann from Connecticut and Wood from Illinois after a 61 year separation.

There’s probably a lot that could be written, but the words of Wood himself seem especially appropriate when he said, “This has been one of the most enjoyable weeks of my life.”