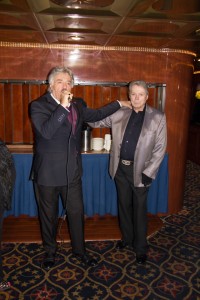 Mickey Gilley and Tony Orlando sharing some memories at the event.

When Main Street Lake Cruises’ 100 foot luxury yacht the “Landing Princess” left her moorings at the Main Street Marina on the evening of November 10 it was on a special cruise to honor Tony Orlando and his service to Branson and Veterans. It was an evening filled with elegant dining, fellowship and memories of Tony’s 20 years in Branson.

While on the cruise, and exclusively for this “Behind the Curtain” article, various friends and associates of Tony were asked, “impromptu,” to share one moment in their association with Tony that stood out in their minds. The underlined portion following the bold type names is a summary of that moment followed by a more complete explanation:

Jack Herschend – He kissed me. I have lived here for 63 years and never have I met a man like Tony Orlando. The first time I met him he gave me a great big hug and kissed me on the cheek and you know, in the normal course of events, we men from the Ozarks don’t know how to deal with men kissing us on the cheek. He’s still kissing folks on the cheek and it comes from his heart. He is a heart driven guy, the most loving man I have ever known. (Co-owner of Silver Dollar City.)

Chris Cathcart – His graciousness. We were doing the “Santa and Me Show” which has a scene in it in Tony’s living room that involves a sofa that Tony and Santa sit on for a major part of the act. Between acts, somehow the sofa had not been placed on the stage. Tony comes down the stairs and Santa comes from the wings with neither realizing the couch wasn’t there until they went to sit down. Tony realizing that the couch wasn’t there said, “Well my couch used to be here.” We rushed around and got the couch out there and Tony used the situation to adlib a funny thing out of it and entertain the audience. After the show when he came off stage, I apologized to him because it was a mistake that could have ruined the flow of a major part of the show, but Tony, being the gracious man he is smiled and said”It’s fine, I never sweat the big stuff, it just happens, mistakes happen.” (Branson entertainer who performed with Tony.

Kathy Lennon – The first time we sang the “Christmas Song.” As we, the Lennon Sisters, sang the “Christmas Song” with Tony at the Welk Theatre for the first time we just looked at each other and there were tears in everyone’s eyes as a special instant bonding took place right there on the stage. We worked with him for three years and he was and is nothing but family to us.

Steve Presley – Tony’s first Veteran’s show. I went to the very first Veterans show Tony did at the Yellow Ribbon Theatre. What Tony has done for Branson and for the Veterans over the last 20 years has been amazing. (Founding member of Presleys’ Country Jubilee, the first show on the Branson strip.)

Ross Summers – His willingness to do whatever he could to help Branson. We do a show at the American Bus Association Convention to support a charity. About three years ago the charity was the “Yellow Ribbon Fund” and we thought it would be great if Tony could do the show. I went to Tony and before I could even tell him what we needed he said, “The answer is’ Yes,’ what can I do for you?” (CEO Branson Lakes Area Chamber of Commerce & CVB)

Mickey Gilley – He mesmerized me. The first time I saw him perform the “Santa and Me Show” I was memorized. (Country Super, star as he was departing the boat before departure to go do a show.)

Susan Smith – His ornate ability to make everyone the star. I have worked with him for many years and he has an unselfishness about him and a willingness to give others the credit and make them feel like they are the most special individuals in the world.

Although Tony will continue to live in Branson this will be his last year performing in Branson. Tony Orlando’s Great American Christmas show will be have its final performance in Branson on November 18.