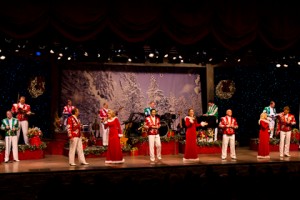 BRANSON, Mo., November 20, 2013 – “Branson’s live shows are a key element in the wonderful uniqueness of Branson entertainment any time of the year, but especially during Ozark Mountain Christmas,” said Tiffany Isnard, Director of Marketing for the Branson Tourism Center. “From the Christmas shows presented by most of Branson’s resident shows to unique full production Christmas shows it is unlikely that any other travel destination in America offers the variety or number of Christmas shows celebrating the traditional American Christmas that is available in Branson during Ozark Mountain Christmas,” she continued.

Most of Branson’s regular season resident shows also have Christmas shows which include a mixture of their regular season show and a major Christmas segment, usually during the second half of the show. Each is a special Christmas blessing. This includes some of Branson’s most popular shows such as Clay Cooper’s Country Express; Duttons; George Dyer; Hamner and Barber Variety Show; Haygoods; Legends in Concert; Mickey Gilley;Pierce Arrow; Presleys’ Country Jubilee; Rankin Brothers; SIX and many more.

Sight and Sounds spectacular production of the Miracle of Christmas uses drama, spectacular sets, music, and dance as it shares the story of the greatest miracle of all time and the true meaning of Christmas. From flying angels, camels, horses and other animals, to wise men, shepherds and action, it is a musical drama taking in the full length of the theatres 300 foot long surround stage. This show is one of the most spectacular things most people will ever experience on a stage in terms of production, grandeur, entertainment and scope. Its amazing ending goes beyond the birth of the Christ Child and explains the precious gift He brought to us all.

Christmas in Hollywood presents Christmas from the perspective of “Hollywood” and some of its amazing Christmas films. From the classic Christmas movie, “White Christmas” and many more, see the classic moments from some of Hollywood’s greatest Christmas movies on the screen as they are brought to life on stage in amazing production full of holiday fun and festive cheer with all of your favorite classic holiday songs, dazzling scenery, gorgeous colorful costuming and the “highest kicking chorus girls this side of the North Pole.”. 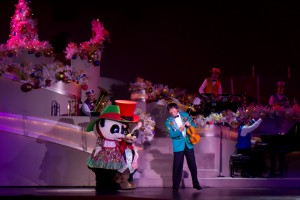 Shoji Tabuchi’s “Wonder of Christmas” is a great example of just why the Shoji Tabuchi Show has been a Branson standard for over two decades. From toy soldiers, flying angels and spectacular sets and colorful costuming to Christmas and holiday music ranging from the fun and revelry of a “Blue Grass and Big Band Christmas” to the simple elegance of Shoji playing “What Child Is This” and much more it is a 100% Christmas extravaganza in the finest Tabuchi tradition.

The entire theatre is beautifully decorated for Christmas as is the stage, but it doesn’t stop there. Whether it’s the very talented Christina Tabuchi singing a beautiful Christmas love song in front of an elegantly decorated and lit Christmas Tree, the simple set used in the Christmas Chamber Music and Bell Choir segment, the amazing number of costume changes or the elegantly decorated main set, this show sets the bar in terms of Christmas production shows and truly has something in it for every member of the family.

Dixie Stampede – Dolly Parton’s Dixie Stampede, celebrates Christmas as only it can. Oh, it still has its famous four course meal and all the action, excitement and fun of the “north” and “south” competition it is known for and its renowned equestrian acts, but with a special Christmas flavor. The servers change from the military type “north” and “south” uniforms into the “elf” uniforms as the “north” and “south” pole elfs compete against each other. In addition to other spectacular surprises this Christmas celebration includes a dramatic live Nativity Scene which shares the true meaning of Christmas in a spectacular fashion as it descends amid inspiring music, soaring angels, animals, the three kings riding their camels and spectacular pageantry. This is truly a one of a kind Christmas show that will delight and hold the interest of every member of the family throughout the whole show.

Tony Orlando is a perennial Christmas favorite in Branson, but this year will be his final Branson performances of his Tony Orlando’s Great American Christmas Show with his last performance on November 28. From a musical perspective the show includes some of his greatest hits such as “Candida”, “Knock Three Times,” “Tie a Yellow Ribbon” and “Sweet Gypsy Rose” and sings many of the songs that have become part of the fabric of Christmas in America. In addition, Tony, his band and cast tell the story of Tony’s first Christmas in the Ozarks and the special visitor he met as the show celebrates all that is great about the Christmas season.

Legends in Concert celebrates Christmas in a special unique way. Each of their “guest stars” Stevie Wonder, Cher, Alan Jackson, The Blues Brothers, and Elvis will perform one of their top Christmas numbers during their set. The expanded all cast Finale is an exciting spectacular celebration of Christmas.

For additional information or tickets for any of the shows mentioned in this article or any of Branson’s other shows and attractions or for lodging arrangements please contact the Branson Tourism Center (BTC), one of Branson’s largest and most respected vacation planning services. BTC can be reached by either calling their toll free number 1-800-785-1550 or through their website www.BransonTourismCenter.com.